I’m having fun using up my stash of bulky acrylic. I’ve had all this KnitPicks Brava Bulky just hanging around, and I think I was saving it in case I needed it for something. Nope, I don’t know what. Yep, it’s a silly idea. So now I’m using it! It knits up quickly on big needles, meaning less stress on my elbow, and it gives me some inexpensive inventory for my Etsy shop. Yesterday I made a little baby hat in a couple of hours. 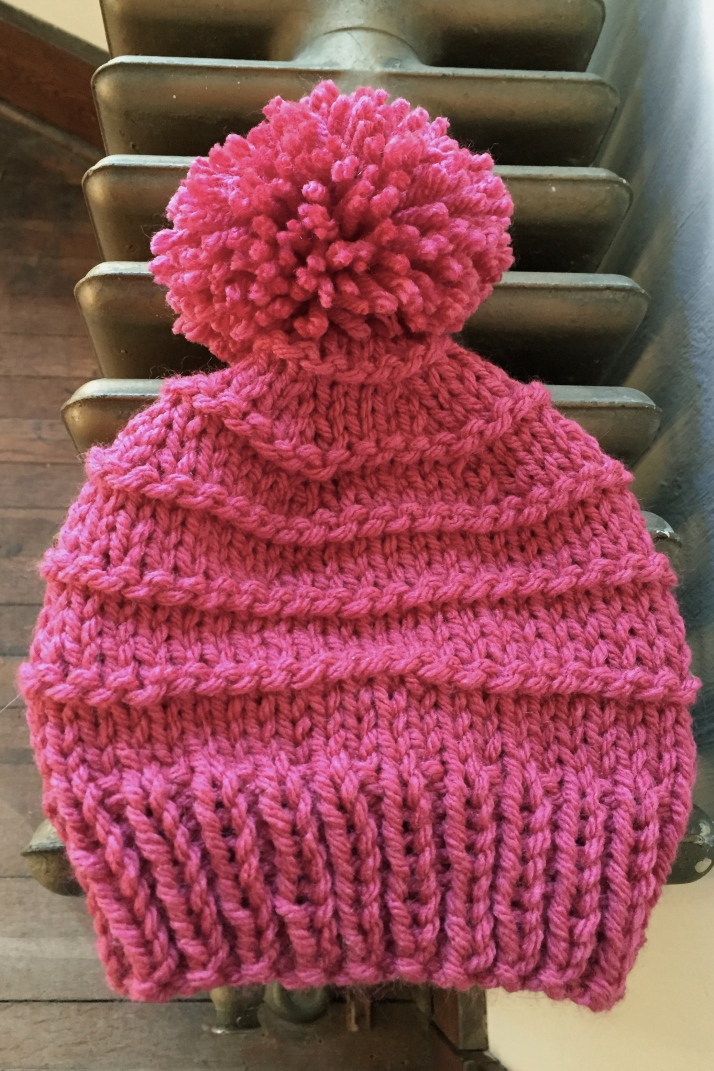 It joins the two cowls already made.

Last night I cast on for another cowl, red this time, while I watched the Golden Globes (that was NOT a good show, am I right?). But what I really want to cast on is the Color Block Wrap, because I got the last color of yarn I needed! Just look how gorgeous these colors are:

I’m trying very hard to tell myself I have to wait until I finish some WIPs first. We’ll see how well that works out; this yarn is calling my name pretty loudly. Happy Monday, friends!

Whee, I knew I could do it! I finished the gray Pacific Chunky hat yesterday! I actually finished it during my waiting room knitting time with ten minutes to spare, which meant I had nothing to distract me from The Young and the Restless on the TV. But still, I was happy to get it done. And I like it. This is the Picholine Hat and it might be my new favorite one-skein hat. The pattern was extremely simple to memorize, but comes out looking more complex. I used size 10 1/2 needles for the brim, which makes it just a bit snugger than I’d like, and size 13 for the body. The result is a nice, loose, floppy hat. The pattern calls for a pom-pom but I didn’t have quite enough yarn left over for that. I’d like to make this again with size 11s for the brims and enough yarn for the pom. This hat used all of the 120 yards in the skein.

Sadly, the rest of my knitting time did not go so smoothly. I didn’t have time to pick up needles again until after dinner, and I thought I would work up something quick and snazzy with my purple Cascade Magnum. First, I tried the Swirling Cowl but my yarn overs were so much looser than in the pictures, and it was making a more open fabric than I wanted. I tried doing the yarn overs going the other direction and that might have helped, except I really needed 16″ circular needles and I didn’t have them. The 24″ were just too long to make it an easy knit. I frogged and started over.

The second pattern I chose was the Marian cowl. I’ve made it before with the Magnum and it works well. I’d wanted to do something different, but nothing else was jumping out at me. So I cast on and started knitting and it was…okay. After a while I stopped and took a Pinterest break, like you do. There, I found the Red Rasta Cowl and it was lovely! THAT’S what I wanted to do with the Magnum! Okay, pattern downloaded, Marian frogged, let’s cast on…with the 16″ size 15 circs…that I don’t have.

There might have been a curse word at that point. In any case, the Magnum is now in timeout. I cast on for a simple beanie in Mizzou colors to be my next easy travel project and then moved on to a simple garter stitch scarf that I need to finish before Christmas. I also turned on the TV and watched some New Girl, Mindy Project and Selfie so I could get a few laughs. It helped end the evening on a high note, instead of being frustrated with the yarn.

Today’s goal is finishing. I really need to stop casting on new things and finish some Christmas presents! I have three Christmas character hats that just need faces, and if I can get those done I think I’ll feel much better about my to-knit list, which is too long for comfort. How long is your Must-Knit list? Have you started focusing on gift knitting yet?

Well, I screwed up. Not big time, but still enough to be annoying. One of my WIPs is in timeout while I think about what I did. This project was one where I knew what the yarn was going to be as soon as I got it home. It was a project I was anticipating. It’s a purse made out of alpaca, so I waiting to start it until a little closer to fall. It was my celebratory back to school knitting. It started out well enough, though since I was using such large needles (size 10) and one strand of yarn, the fabric felt a little…loose.

I kept knitting away, and soon I had two sides and the gusset, which grew into the handle (that wider section).

I didn’t worry about it until last night. I was waiting for the girl at flute lesson, knitting away on the handle section. It’s all garter stitch and it was so open and stretchy. The pattern calls for it to sewn around a ribbon for reinforcement, but it just didn’t seem right. 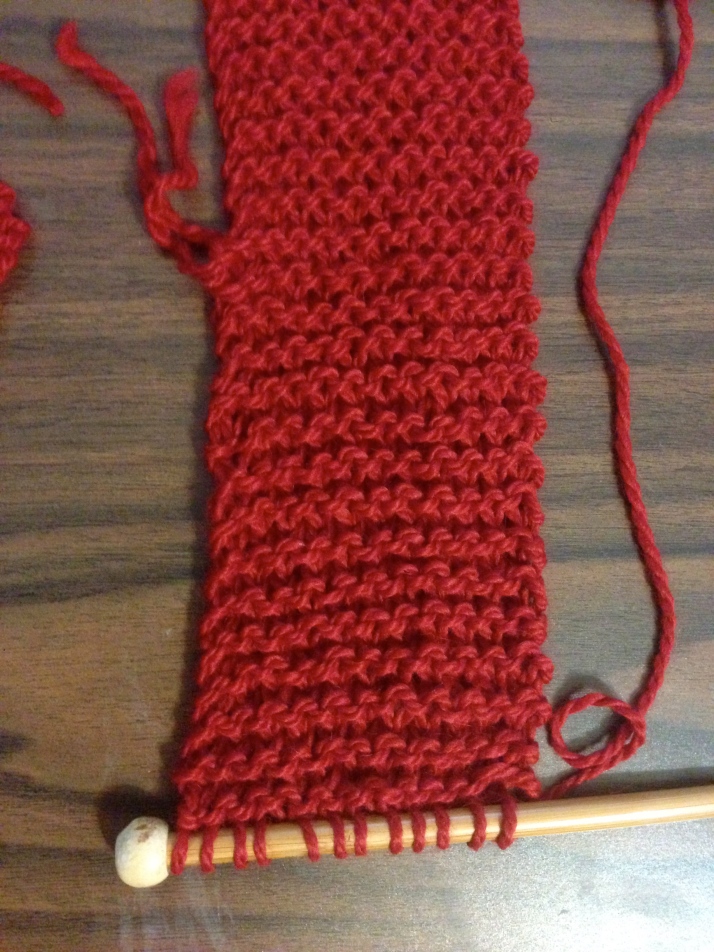 I went back and checked the pattern in the book: it called for Rowan Alpaca Chunky. and I was using Cascade Yarns Baby Alpaca Chunky. Should be the same, right? Wrong. Apparently the Rowan Chunky is a Super Bulky, and Cascade is just a bulky. Substituting the yarns but not the needle size meant the product was coming out much differently than the original. (YES, I KNOW! All you smug gauge-testers are laughing and shaking your head and saying, “I TOLD you so!” You did. I ignored you. Shut up.)

Once I figured that out last night, I stopped knitting. I don’t know what I want to do with it now. I still want to make the bag. I don’t really want to frog the two pieces that are already bound off. I don’t mind their size or level of openness, especially since this whole piece will be lined. It’s just the handle that’s bugging me, even though it’ll also be reinforced and shouldn’t stretch out with use. Do I frog the handle section? If so, what do I do instead? I have enough yarn to double-strand the handle. Or I could knit the handle with smaller needles to make it a closer knit. What would you do?

The kids started school today, one in high school and one in middle school. I cannot believe they’re that old, or that I’m old enough to have kids that old. We had an early start to the day to get them on the bus, and now I am relishing the quiet. I still have a bouncy puppy who wants to play, but otherwise the house is empty. There’s no one else here that I have to worry about, or take care of, or anticipate the needs of. It is bliss. It’s a feeling that I haven’t felt for a long time, and I’ve needed it. I like being their mom, I like helping them and the rest of my family, but I need this time to myself too. What’s the saying? “In the event of an emergency, apply the oxygen mask to yourself before helping others.” I’ve been trying to remind myself of that lately, that I need to take care of myself so that I’m healthy enough to help others. But it’s hard. You all know it’s hard.

Anyway, so today. Quiet, empty house. I finished another Christmas present last night so as a reward I’m casting on a treat for myself. When I went to that store-closing sale a few months back, I bought a bunch of yarn, but I also bought an awesome book by Rowan called Winter Warmers. It’s full of patterns for their Lima (worsted) and Alpaca Chunky yarns, which are the weights I use most. They’re all these gorgeous muted tones of gray and blue and lilac and caramel and I want to make everything in there. I don’t have any Rowan chunky, but I do have several skeins of Cascade Baby Alpaca Chunky, which is probably my favorite yarn ever.

I have three skeins of this red, and they’ve been earmarked for this pattern since I looked through the book. 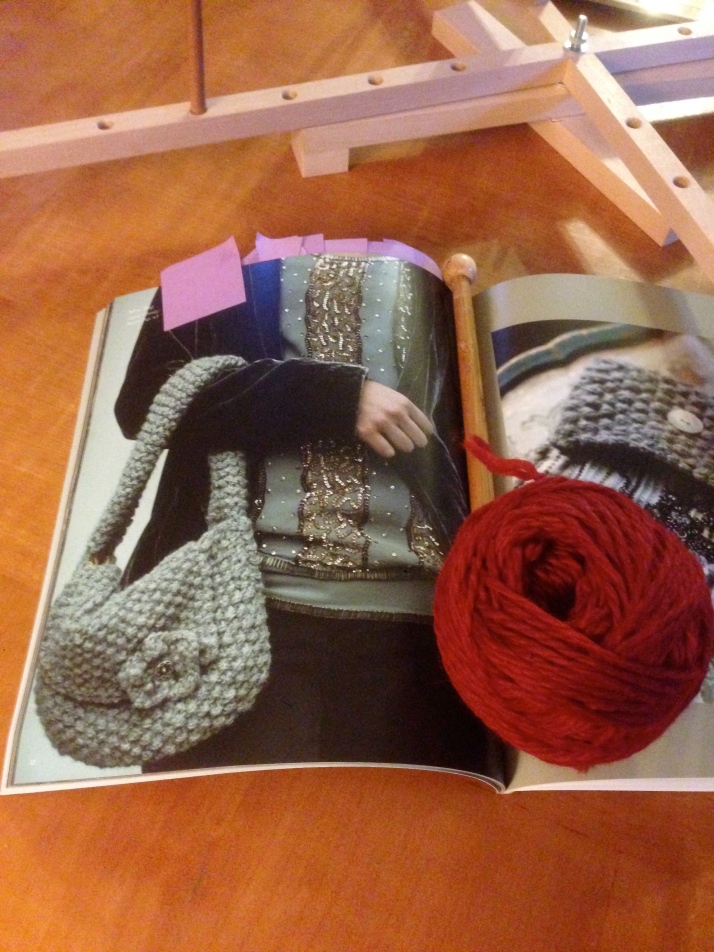