Well, I screwed up. Not big time, but still enough to be annoying. One of my WIPs is in timeout while I think about what I did. This project was one where I knew what the yarn was going to be as soon as I got it home. It was a project I was anticipating. It’s a purse made out of alpaca, so I waiting to start it until a little closer to fall. It was my celebratory back to school knitting. It started out well enough, though since I was using such large needles (size 10) and one strand of yarn, the fabric felt a little…loose. 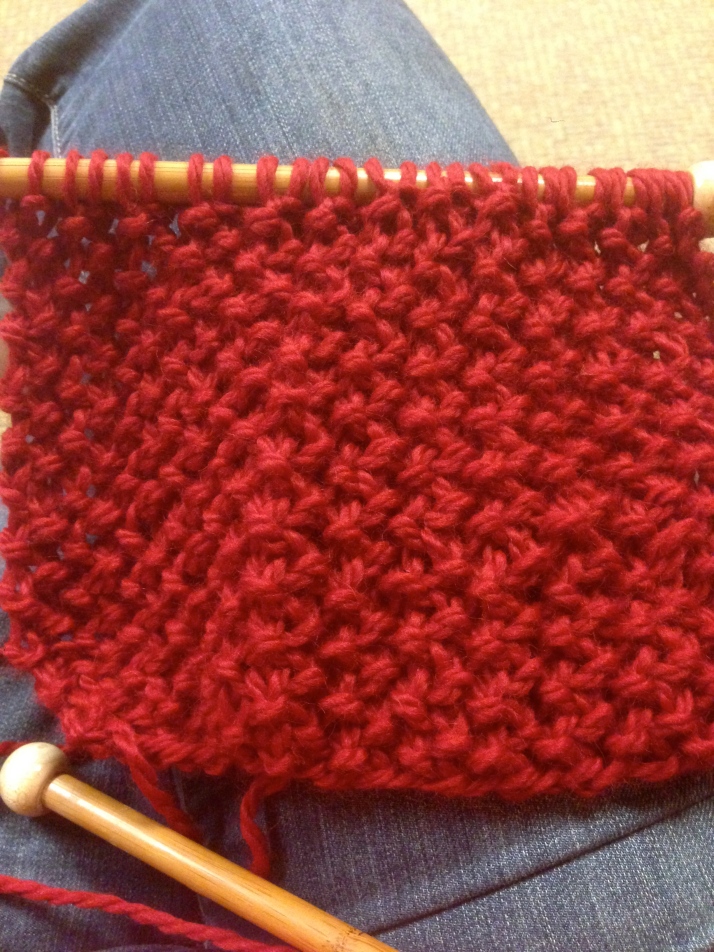 I kept knitting away, and soon I had two sides and the gusset, which grew into the handle (that wider section).

I didn’t worry about it until last night. I was waiting for the girl at flute lesson, knitting away on the handle section. It’s all garter stitch and it was so open and stretchy. The pattern calls for it to sewn around a ribbon for reinforcement, but it just didn’t seem right.

I went back and checked the pattern in the book: it called for Rowan Alpaca Chunky. and I was using Cascade Yarns Baby Alpaca Chunky. Should be the same, right? Wrong. Apparently the Rowan Chunky is a Super Bulky, and Cascade is just a bulky. Substituting the yarns but not the needle size meant the product was coming out much differently than the original. (YES, I KNOW! All you smug gauge-testers are laughing and shaking your head and saying, “I TOLD you so!” You did. I ignored you. Shut up.)

Once I figured that out last night, I stopped knitting. I don’t know what I want to do with it now. I still want to make the bag. I don’t really want to frog the two pieces that are already bound off. I don’t mind their size or level of openness, especially since this whole piece will be lined. It’s just the handle that’s bugging me, even though it’ll also be reinforced and shouldn’t stretch out with use. Do I frog the handle section? If so, what do I do instead? I have enough yarn to double-strand the handle. Or I could knit the handle with smaller needles to make it a closer knit. What would you do?