After a few nights, I have all the pieces of my gift cactus knit. They’re small, simple seed stitch tubes, so super fast to knit. Now I just need to stuff and sew together! And maybe add a tiny flower or two. Then I’ll add some straight pins for the thorns or needles or whatever those prickly things are called on a cactus. 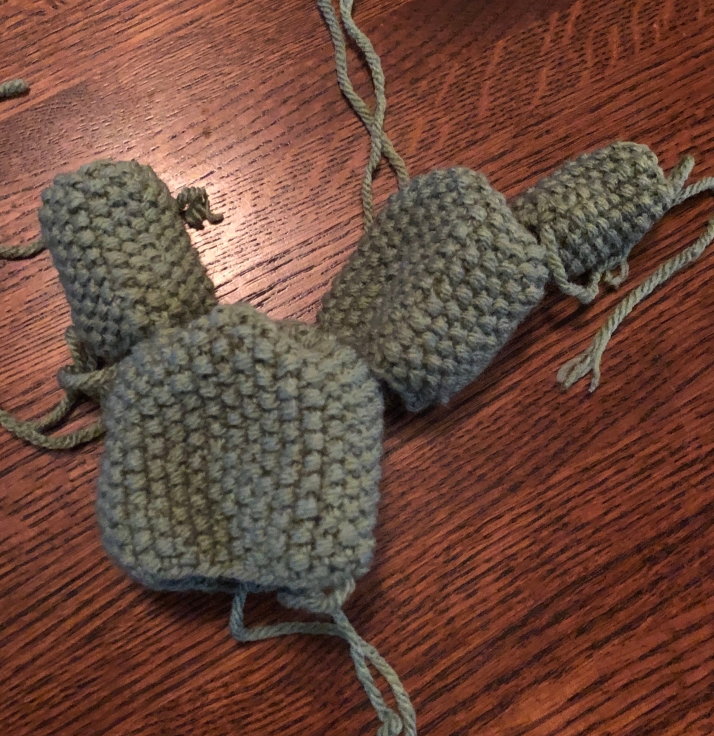 It’s a good thing this one is going quickly because for some bizarre reason I thought it would be fun to do a test knit. Now. Right before the holidays when I’ve also decided to do another Christmas gift knit. And also I got the pattern this morning and it has tiny cables. Of COURSE it does. Sigh. Where’s my brain these days? But it’s a DK weight cowl, and I just bought a gorgeous skein of DK, so it’ll be fine. Just fine. Everything’s fine!

Happy Wednesday, friends! The weekend is in sight!

It’s Halloween! But my kids are older so I don’t have to go out in the cold to trick-or-treat, and I don’t have to answer the door over and over while listening to my dogs bark. As cute as my kids were when they were little, I confess I don’t miss the chaos of Halloween. Instead, I’ll leave my porch light off and just keep knitting like it’s a normal night. I’ve got another bottle sweater on my needles, but today I wanted to show off my latest FO, my Not So Lacy Lace Scarf. 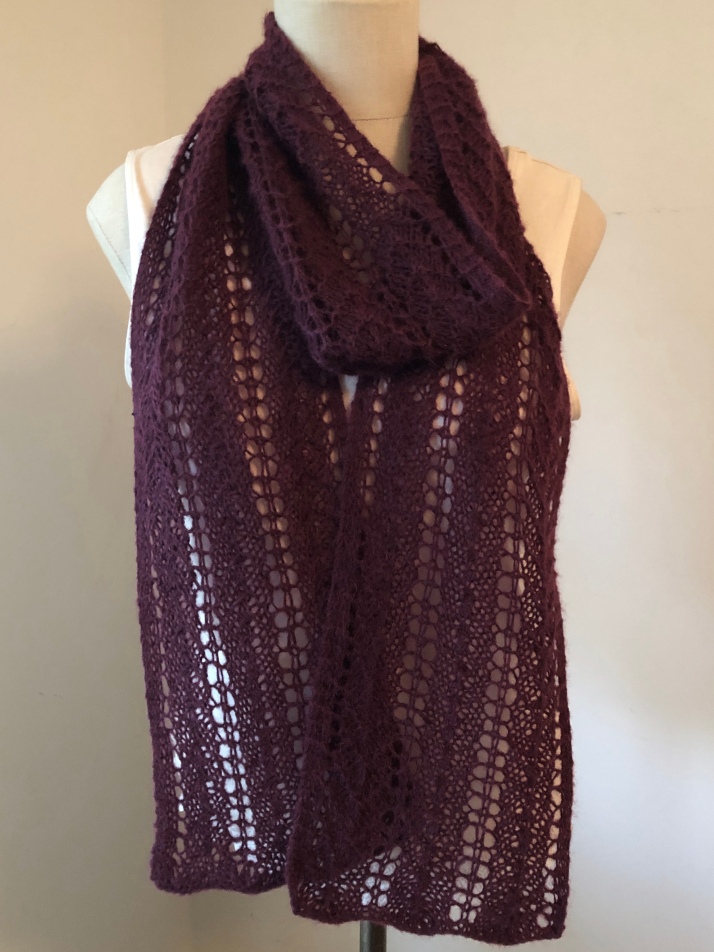 After blocking, it was 72″, and at first I was afraid that was too long, but now I think it’s perfect. Plenty of length to wrap around however you want! Sorry for the less than stellar photos; it’s been a little chilly and I’ve been too lazy to get outside for a proper photo shoot. 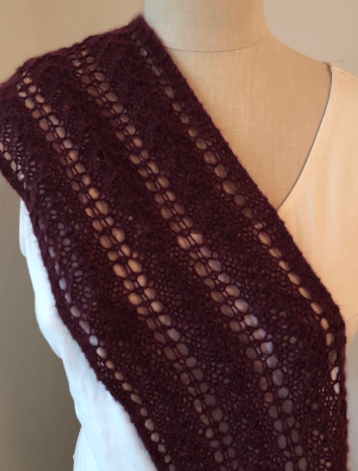 The yarn is Schachenmayr Fashion Soft Mix, a nylon/alpaca/wool mix and it’s super lightweight and soft and fluffy! It’s a gift, and I really hope they aren’t sensitive to alpaca or wool.  I haven’t made a scarf in a long time, and I was afraid it would drag on forever, but I finished this in a week! Once I memorized the 4-row repeat, it was fast and fun.

Hope you all have a safe and fun Halloween!

I’m going back to college! Okay, so it’s just one day-long course, but it’s a class and it’s at a college, so it counts. I’m taking a course in Microsoft Access Fundamentals, and it’s for work. Like they encouraged me to take it and paid for it, and I love that they’re eager and willing to support the growth of their members. And I’m kind of a nerd who likes learning new things so I’m looking forward to it a lot.

I have thought about going back to college though, maybe for a Communications or Marketing degree. Actually, what sounds the most intriguing is Graphic Design, and I could do that through a local community college. But with a college freshman, a high school sophomore, and a fixer upper with a big project looming, it’s not in the cards at the moment. Still, I’m keeping the idea in my pocket for when/if it becomes more feasible. Have any of you gone back to school as grownup? Is it scary? Overwhelming?

I do plan to have a project with me just in case I have some time to knit. Or maybe crochet! I have another hat commission, this one using some gorgeous silk yarn from Expression Fiber Arts. Color is Russian Blue. 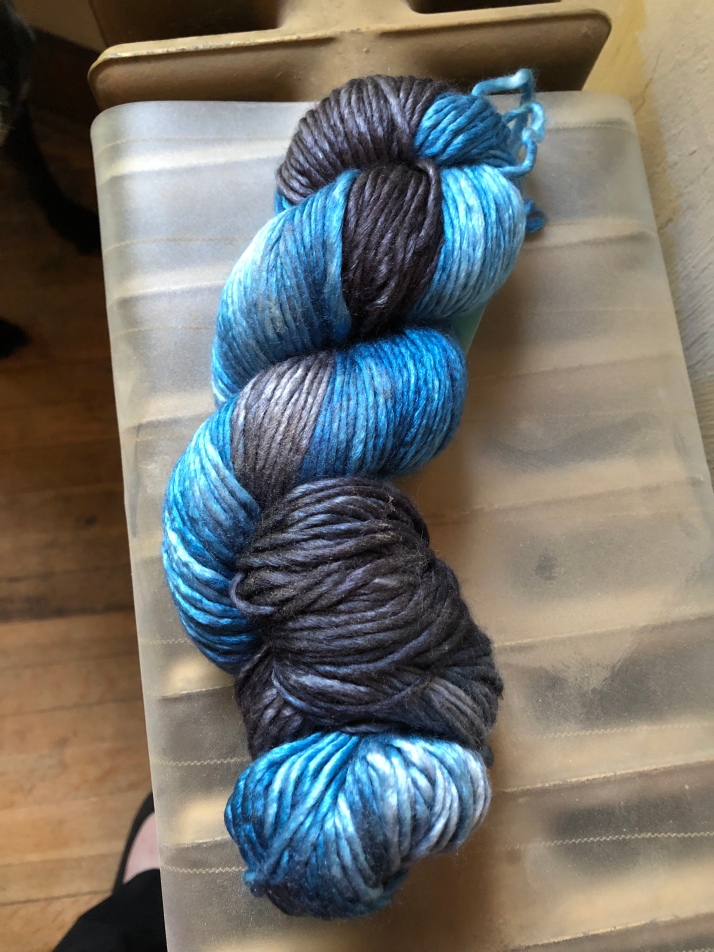 That’s a Scat Mat it’s lying on, and yes, there’s my foot. Not all photos can be a masterpiece, you know!

My new sock project is a test knit called Paddington Station Socks for Ambrose Knits ( I found her on Instagram). She’s got several ones she’s working on, and they all look like fun to knit. I know I’m enjoying these! 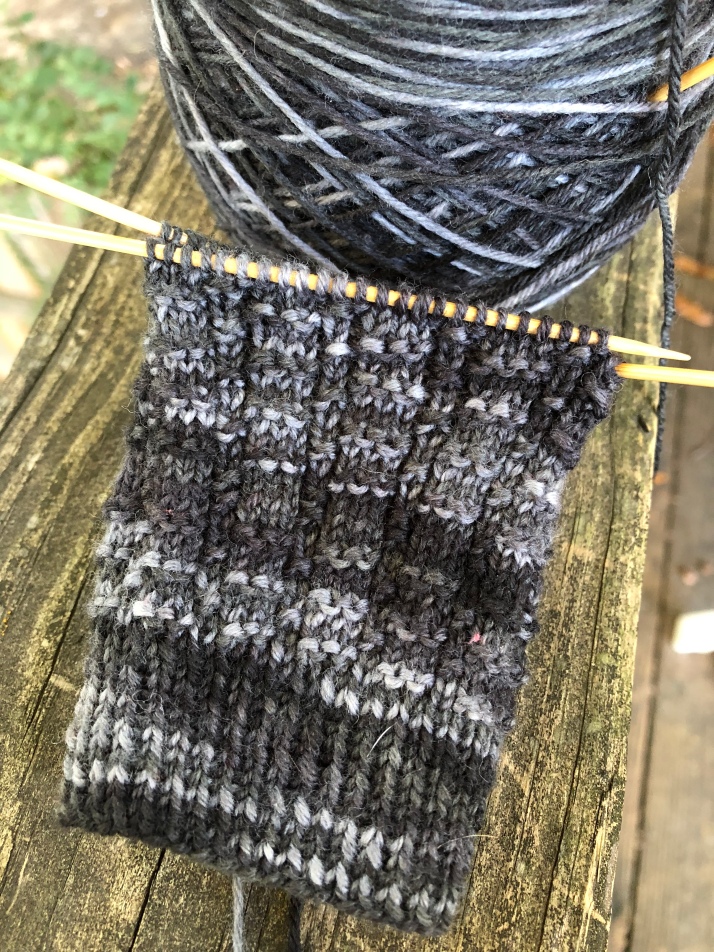 The yarn is my new Knit Picks Stroll Hand-Painted in Train Station Tonal. I’m liking the colors and the yarn a lot! The yarn is soft and knits up thick on my size 1 needles, and the pattern has just enough variation to keep me interested. I’m eager to see a finished sock!

So I finished the sock on the plane ride here, and the girl was very happy with her new socks. Fortunately I planned for that and still had three other projects to work on. Yesterday on our way to Boulder, we made a spontaneous stop in Longmont to visit the Longmont Yarn Shoppe. And I’m so glad we did–the selection wasn’t vast but it was all marvelous. I had to work hard to restrain myself to two skeins. 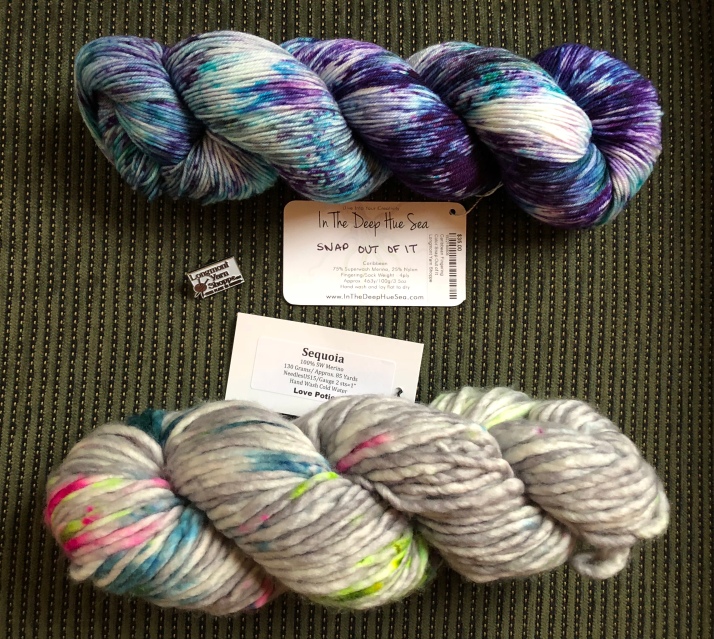 I also got a super cute pin for my collection. 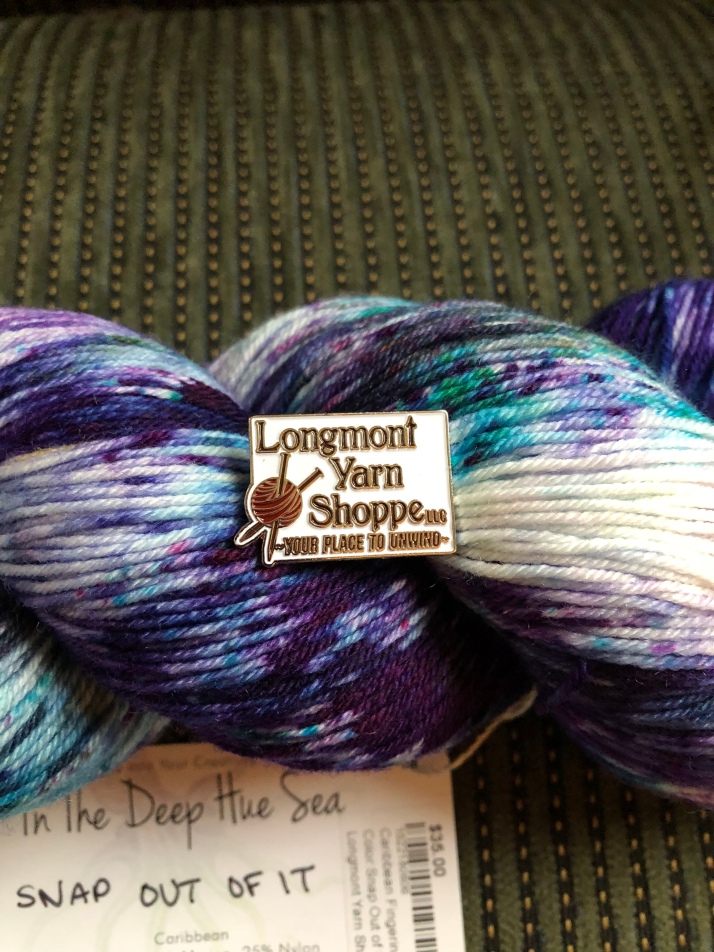 I tucked them into my suitcase and pulled out my mermaid shawl today and understood why knitters always pack extra projects: after two rows, my shawl was ready for color two. I didn’t have color two with me. So mermaid shawl went back in the suitcase and the girl took me to JoAnn so I could get some chunky needles to cast on my new super bulky Baah! Yarn.

While there, she announced she misses knitting and wants to make a scarf for one of her friends. Of course I’m happy to encourage that! When we got back to her dorm, we both cast on. 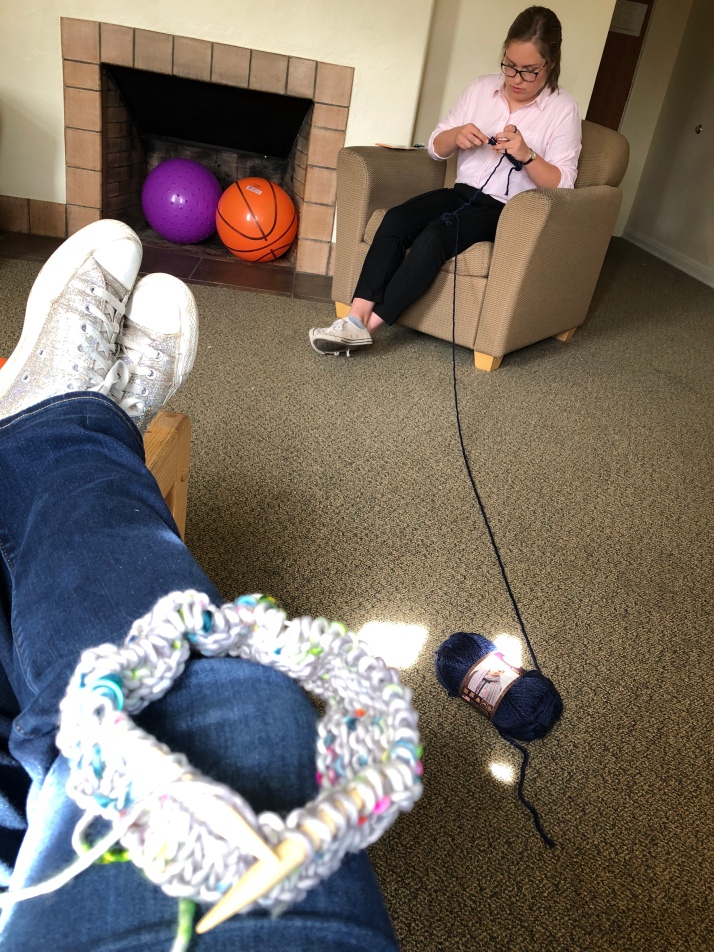 After a couple of hours, I had an awesome new cowl. I’d forgotten the instant gratification from super bulky yarns! Now I want more! 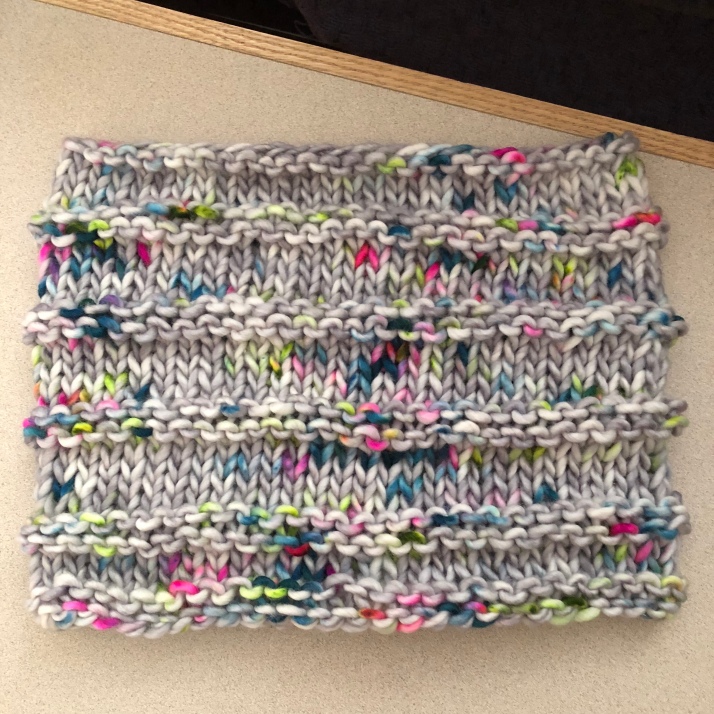 Yarn is Sequoia by Baah! and the pattern is because I’m happy, and it’s free, simple, and a breeze to make.

And now that it’s done I guess I’ll go back to my sock. 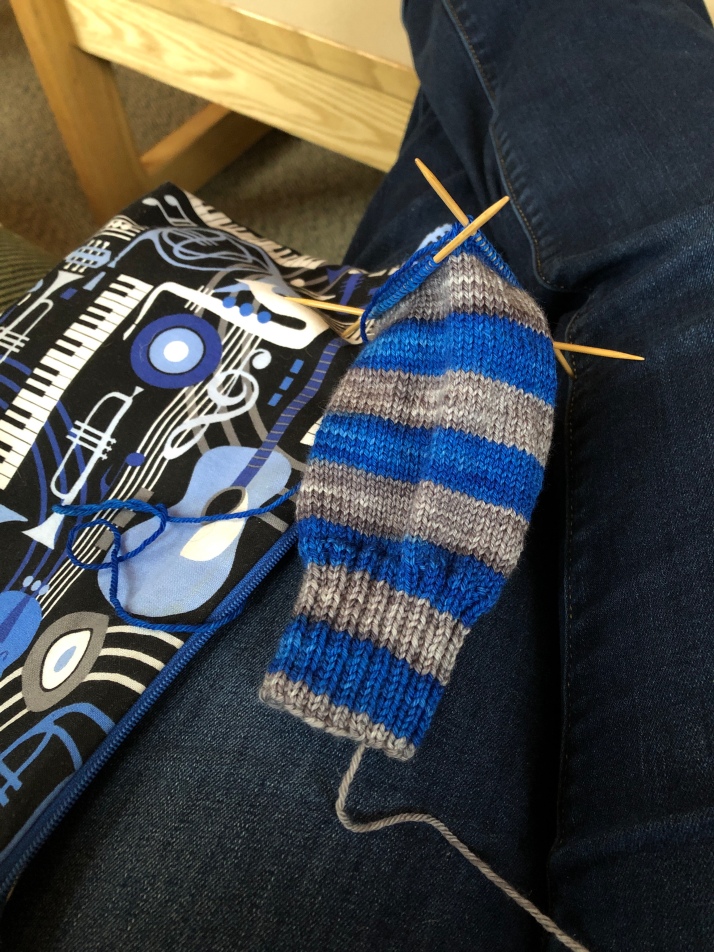 My Mab shawl is done! It might be my favorite thing I’ve ever knitted, thanks to the perfect combination of yarn and pattern. I have no idea what the name means, but you can find the pattern on Ravelry here. 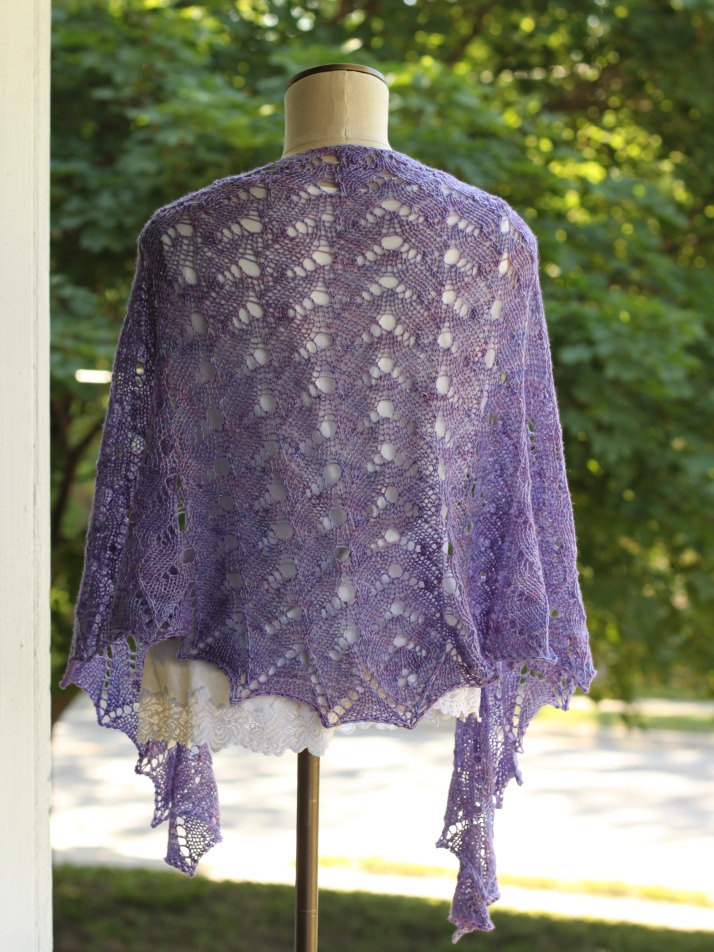 I absolutely loved knitting this pattern. The lace wasn’t difficult, but I did have to keep track of what I was doing. I think I’d been craving some intricate lace knitting, and this definitely fit the bill. For this one, I even tinked back when I made mistakes, rather than just fudging things like I usually do. I really wanted the lace to line up from top to bottom. I knit the pattern exactly as written, no modifications, and I made sure to bind off loosely so I could get the gorgeous points along the lower edge. As I was knitting, I worried it would be a little too small, but thankfully it blocked out beautifully into a very generous shawl. 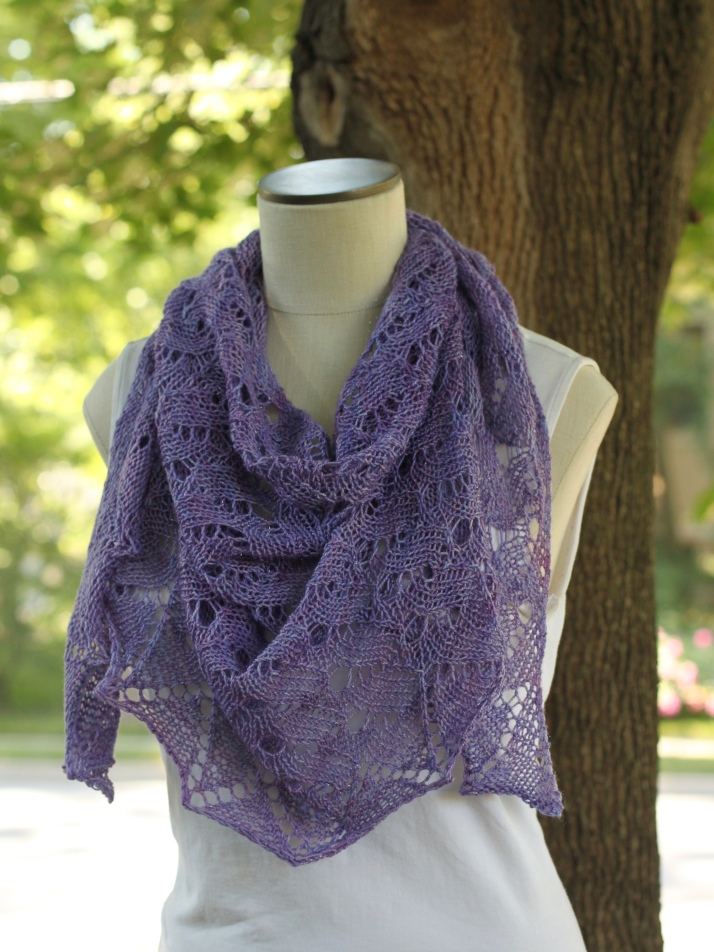 I did indeed finish my Mab shawl as I said I would, so it is currently pinned out and drying. (And it is stunning, if I do say so myself. I’m hoping to do a photo shoot tomorrow.) So what am I doing with my pruned down stash and fewer projects on the needles?

I’m planning a sweater, of course.

It’s over 90 degrees outside. Our downstairs A/C isn’t working so it’s 86 degrees in my living room. (Thankfully we have two units and it is blessedly cool upstairs in the bedrooms and my craft room.) You get the idea: it’s hot. So why in the world would I be working on a sweater, a wool/alpaca sweater even?? Because while I was going through my stash to pull out unwanted yarn, I found four skeins of Berroco Ultra Alpaca, all the same color and the same dye lot. What are the odds, right? Especially since I know I bought it back when I thought I’d never knit sweaters. It was probably on sale, and since it was purple, I probably just bought what they had left. 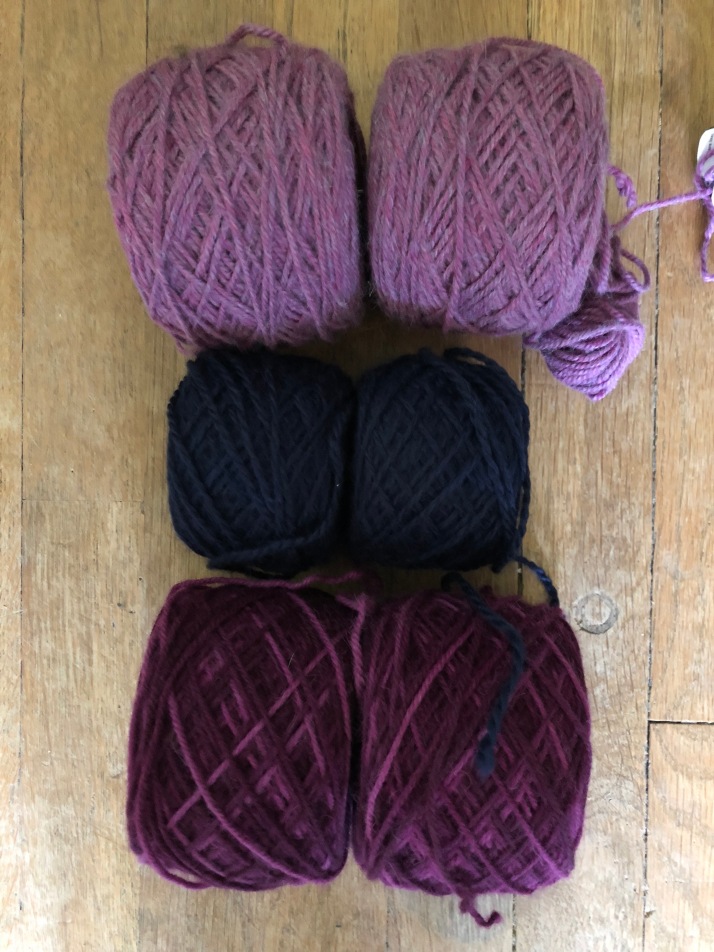 I’m planning to make Tea with Jam and Bread by Heidi Kirrmaier (I even have my gauge swatch already laid out and drying too!) but I’ll alter the stripe pattern a bit. I don’t think I’d like the navy as the bottom stripe (can’t tell you why, just my brain saying no don’t do that) so I’m going to do the top stripe navy, and then the bottom stripe and the bottom sleeve sections in the magenta. 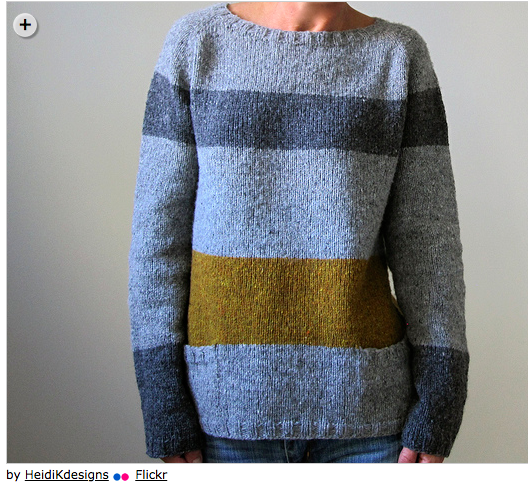 (LOOK! It even has POCKETS!)

And if I get to that bottom stripe and don’t like the color variation of the magenta with the lighter purple, well…I’ll figure something else out. But until then, I’ll be working on my wool sweater in June in the midwest!