If you remember, I recently received a request for some KC Royals-themed knitwear. The mitts were finished first, and yesterday I whipped through the four ear warmers. I have to say, they drove me bonkers at first. I’d made one for my friend as a gift, just improvised, and I needed to replicate hers. Well, I hadn’t taken any notes, and all I had was this photo. I assumed it was 2×2 rib so that’s what I did, but for one thing, it came out WAY too big and the ribbing didn’t look like it matched. I set the first one aside and started over with fewer stitches and 4×2 rib. Still didn’t match, still too big. Frog, start over with fewer stitches. Finally, I found a recipe that pleased me: I cast on 65 stitches on size 9 needles and knit 3×2 rib with the yarn held double for a nice warm fabric. Six rows blue, two rows white, six rows blue. For the first one, I used Jeny’s stretchy bind off but that made it way too stretchy, so for the rest I just did a normal bind off and that worked just fine. After that, it was smooth sailing. For the last one, I did frog the first sad too-big attempt to reuse the yarn. Waste not, want not! 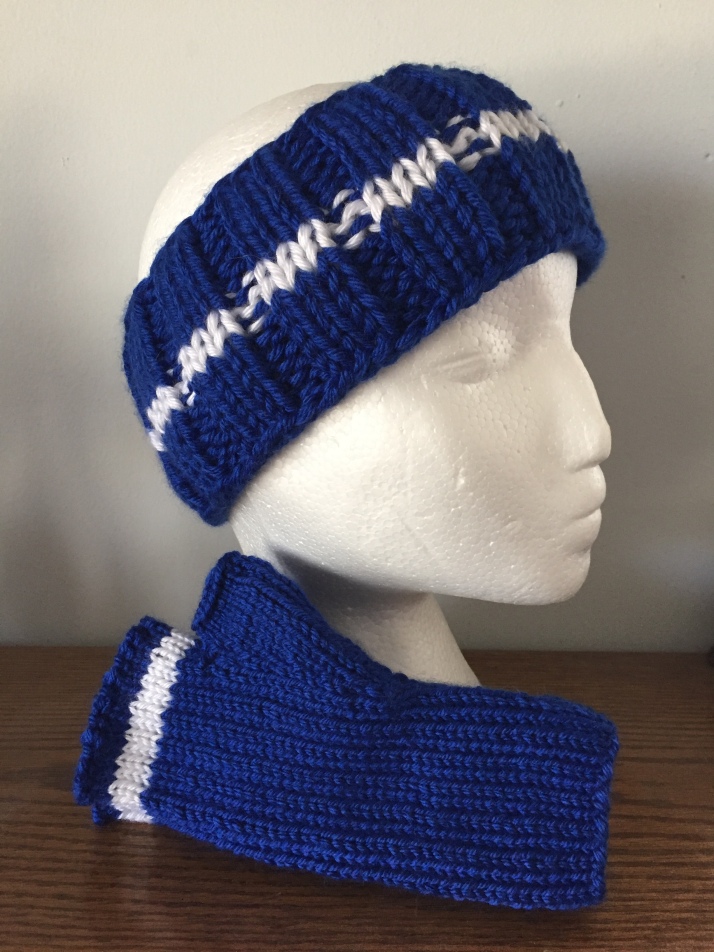 I think they’re pretty cute! I’ve got about a skein and a half of the blue left, so I’m going to make some more fingerless gloves for my inventory. We’ll need them when the Royals get back to October baseball!

I finished the second pair of fingerless gloves yesterday; got all the ends woven in and everything. And the best part is: I have two pairs of matching mitts! I’m the worst at making two things the same size. I lose count of rows, or I go by measurement and maybe one ends up a row shorter or longer. Even with these, the two pairs don’t match. One pair is longer than the other. No idea how that happened; I really did think they’d all come out the same. BUT, at least each person will have two gloves that match. 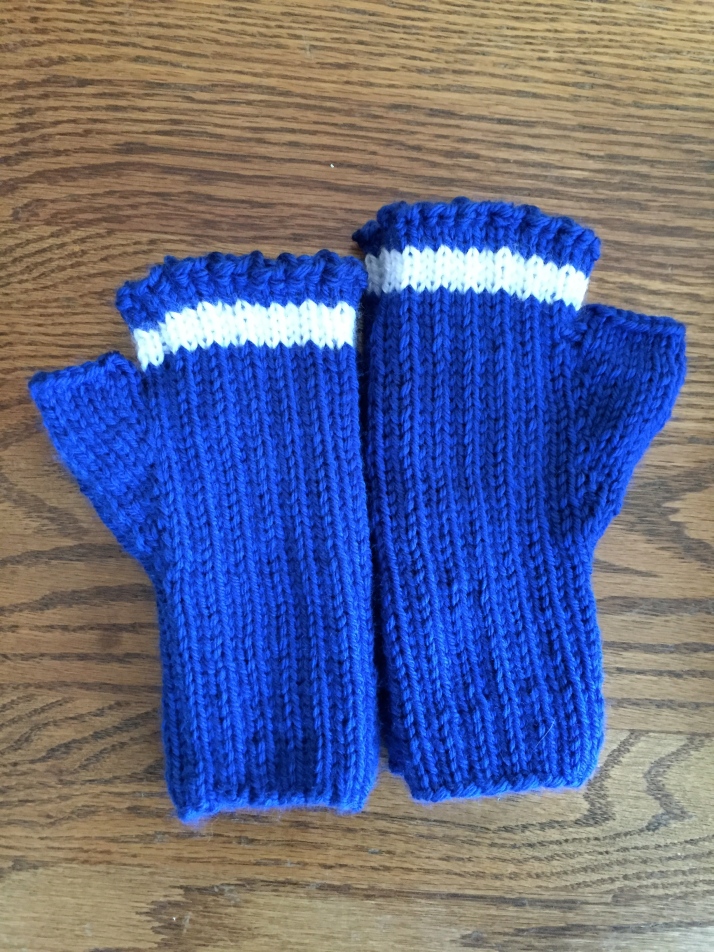 The 5″ DPNs were marvelous, too. Much more comfortable than the metal, and I was able to put the stitches on 4 needles instead of 3, which seemed to help a lot with laddering. And the thumbs! I can’t imagine trying to do thumbs on the 7″ needles. I’m definitely glad I got the shorter needles. But this is one more reason I shy away from socks: I’d end up with non-matching socks!

How do you guys make sure your pairs come out the exact same size?

I have two cowls to share today, one older and one brand-new. Let’s start with the older one. A while back, I used my one and only skein of Lorna’s Laces Shepherd Worsted to make a Boomerang Cowl (pattern by MollyGirl Yarn). Here’s my Berry Cowl unblocked. 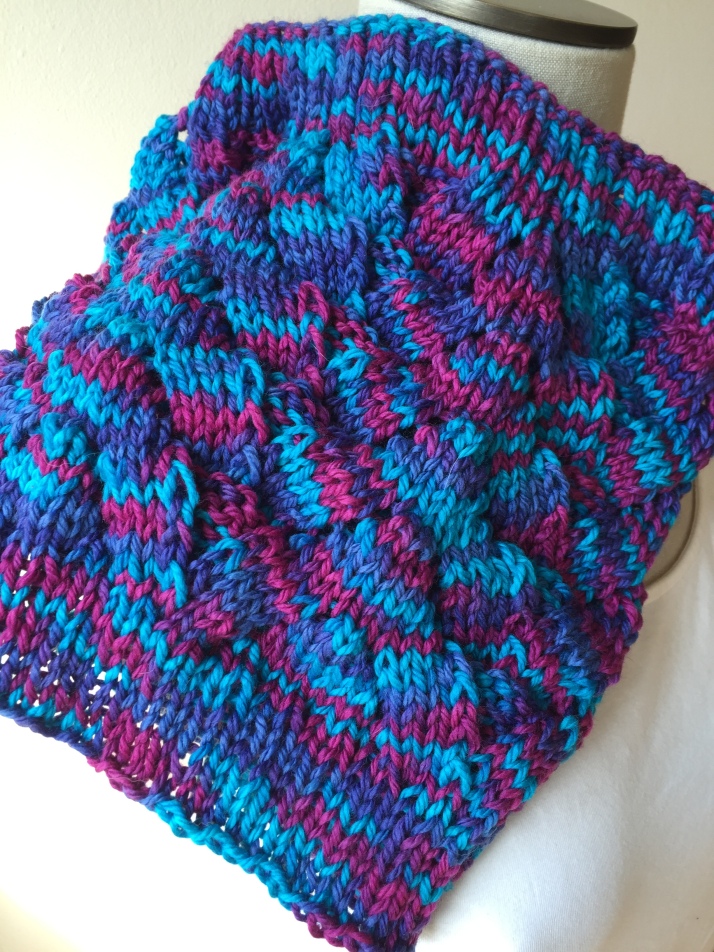 I finally got around to blocking it yesterday. I blocked it pretty aggressively for a few reasons: the bind-off was really loose and I wanted both edges to be the same, I wanted it to be wider, and most importantly: I wanted to show off the pattern. I like the results!

I should be able to get a couple of wears out of it before it gets too warm. And now I need to do the same for my Take the Crown cowl, which I finished yesterday thanks to a few hours of outside knitting time.

The puppies kept me company, one by my side and one in the sun.

I decided to trust the pattern and finish it rather than frog it, and I think I made the right choice. 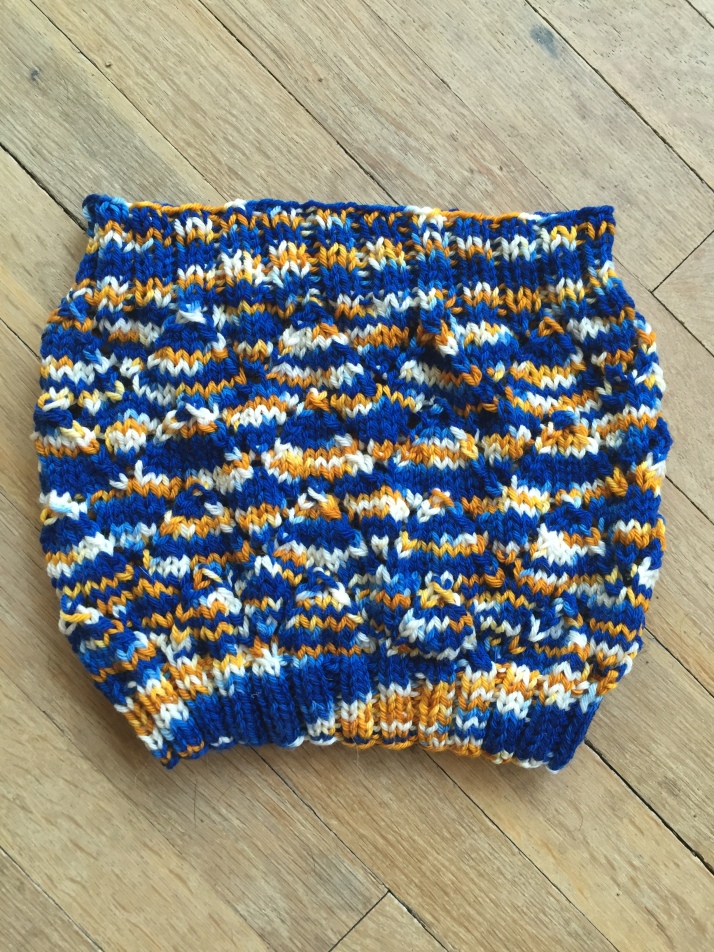 Blocking should get it to a good width for a closer-fitting cowl. I found it fascinating to see how the colors pooled in the ribbing at the beginning (the bottom ribbing) but not at the end. This will be wonderful if I make it to any Royals night games this season! The pattern, which is a zigzag, does get a bit lost in the yarn, but I like it because in my mind, it represents the points of a crown. And again, blocking should open it up nicely. Details: the yarn is Nerd Girl Yarns Clever in color Take the Crown and it was heavenly to knit with. Soft but not limp, not splitty at all, just flowed wonderfully over the needles. This pattern is River Deep, Mountain High by MollyGirl Yarn and this makes my fourth.

What about you? What are your go-to patterns, the ones you knit over and over?

I’m not thinking much about knitting today. I’m thinking about baseball. I’m thinking about the Kansas City Royals, my lifelong baseball team. I was lucky enough to go to the game yesterday, and I got to see them sweep the Orioles and become the American League Champions. This was my view from the club level, right next to the broadcasters’ boxes.

Craft was involved a little bit, I guess: I was carrying a handmade purse I bought over the weekend at the craft show, and I was wearing the Royals fingerless gloves that my SIL made and I stole.

It was an amazing game, but I might not need to tell you that. I’ve been to a lot of baseball games in my life, and this was easily the best. The joyousness in the crowd, the unwavering belief, the collective breathlessness…it was magical to be right in the middle of all of it. There were big moments when the Jumbotron urged us to get loud, but we couldn’t. We were all holding our breath, silently urging our boys in blue to get this strike, this hit, this out, this game. And when they did, when they won…WOW. High-fives everywhere. People were jumping and yelling and crying, and nobody left. There was no big exodus to be the first to leave the parking lot. We wanted this magic to keep going. We all stood and watched the team celebrate on the field. We saw all the players’ wives and kids come out, and the little kids ran around the bases and played on the field like it was just an ordinary playground. Thanks to a cameraman in the locker room, we got to see the champagne celebration.

Once the players went into the locker room, some fans started leaving. We stayed. My friend and I stayed, watching from the balcony that is the club level, until they kicked us out. Then we went downstairs, and saw the players reemerging. Salvador Perez was on top of the dugout, talking to fans and giving away his hat and shirt. He took photos with fans. When he jumped down to do a lap around the stadium, high-fiving fans along the way, Nori Aoki took his place. We were behind the visitors’ dugout by then, and as Salvy came around in front of us, I stood on a seat so I could see him as he went by. He was beaming. I thought too late that I should get a photo, but I was too busy enjoying the moment. I watched Nori jog out to center field and lie down, clearly savoring it all. As he leaped up and jogged our way, I got my camera ready.

Nori is my favorite Royal, I think. He’s not the big-name, big-moment guy like Moose or Gordo or Cain. He’s not flashy like Dyson or consistently amazing like our bullpen trio of Herrera, Davis and Holland. He gets pulled late in the game so that Dyson, a speedy base-stealer, can go in. But he’s steady, and he’s good. Nori can be so very good, but people don’t always recognize it. And I think that’s true about the Royals too. It has been true all this season, maybe longer. They were, are, so good, but they’ve been the joke in baseball for so long that people didn’t figure it out until near the end of this season.

We’re not the joke anymore. We’re the feel-good story. We’re the proof that success can come to those who keep pushing on. Finally, everyone else gets to see what I’ve been seeing for years. Yeah, we’ve had rough years, and there have been times I’ve joked too about the Royals being the farm team for the other major league teams, but in my heart I believed, and I know there are a lot more like me out there.

So why is there so much emotion tied up in this? I’m not sure. But I know I’m also thinking about my dad right now. In 1985, he worked for Marion Laboratories, owned by Ewing Kauffman, who owned the Royals. Thanks to Kauffman’s generosity with his employees, we got to go to a lot of games as a kid. I remember the cotton candy, the roar of the crowd, being silly with my siblings. I remember eating hot dogs at home early so we could leave as soon as Dad got home. I remember my parents going to the World Series and watching the Royals win, and even then, at 9 years old, I was aware enough to be excited and jealous. So now, with my dad gone over two years, I wish he could be here to see this. I wish he could be there at the watch parties with my mom and my siblings. But I’m so thankful that he helped bring this game to my life. I’m so thankful that he helped it become something I can share with my family and my friends. Maybe that’s where the emotion comes from, from having these experiences be so intertwined with the people you love.

I’ll be watching the World Series starting on Tuesday, waving my rally towel and cheering on my underdogs-made-champions. I want them to win. I believe they *will* win. But in so many ways, they already have.