I’ve been knitting, I swear I have, but I have nothing to show right now. I’m flying along on the test knit I’m doing for Andrea at This Knitted Life, and I’m loving it, but it’s not time to reveal that one yet. Here’s a sneak peak. 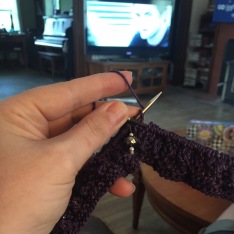 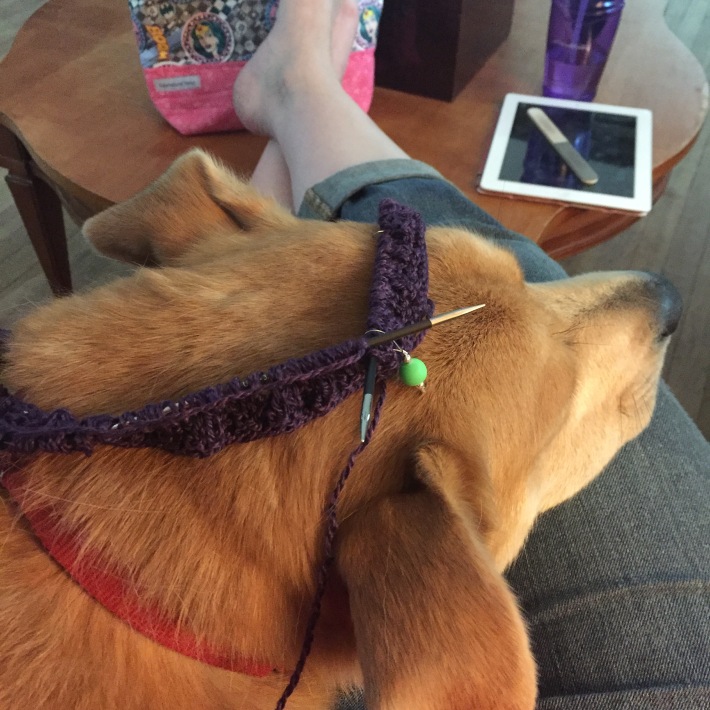 I will say that I found an error in the pattern and I was quite delighted because A, it meant I was doing my job as a test knitter right and B, the strange result I’d been getting wasn’t because I’m a crap knitter (which was what I was sure of for a while). I did have to frog about 15 rows of progress but I wasn’t stressed about it, and ever since I restarted, it’s been smooth sailing and I’m going to love the final product.

So instead of showing you knitting, I’ll show you the yarn I got the other day. I stopped at Savers, a thrift store near my house, on a whim and got all excited because I found a cake platter with a dome to replace the one broken in our move last summer. Then as I shopped more, I got even more excited because I found yarn!! And not just cheap scratchy acrylic, either! I found sock yarn, some Patons, some Deborah Norville Serenity, some Regia Galaxy. They were all jumbled together in plastic bags, and I found two bags with colors I really wanted, so of course I had to buy both. Plus, when you find good yarn for cheap, you just…buy it, right? One bag had some blue/gray that will go to my Knitting SIL, and these are the skeins I wanted.

They’re so pretty! I don’t make socks, so I don’t really know what they’ll be. My SIL makes these pretty yarn bags with sock yarn, so I might try one of those.

Then I found some glow in the dark yarn, and well…I bought some. No good reason, except I lose my head a bit around cheap yarn. I think it’ll be fun. I might make a couple of cute kid’s scarves with them.

And that would be fine if that’s all the new yarn I bought. But NOOOOO, of course I had to go to my LYS. “Just to check things out,” I told myself. I just needed to be in a yarn store. Ha. Yeah right. Before I knew it, I had several skeins of clearance yarn in my arms, and then she had the gall to tell me that all the full-priced yarn was 20% off. (They’re closing next month. I know. I’m devastated.) Well, apparently that was all the permission I needed to get some of the Cascade Ultra Pima cotton I’d been drooling over. And because she’s good at her job, she told me about two patterns a lot of her customers have been making with it. Sigh. Yeah. This is what came home with me.

These will be the Secret Beach Diagonal Scarf and Cowl when I have time to cast on a new project. Yummy yummy colors, I think!

And here’s my clearance yarn, more Berroco Luster. I have a special fondness for yarns with a sheen. I’ve got three who skeins of silver… 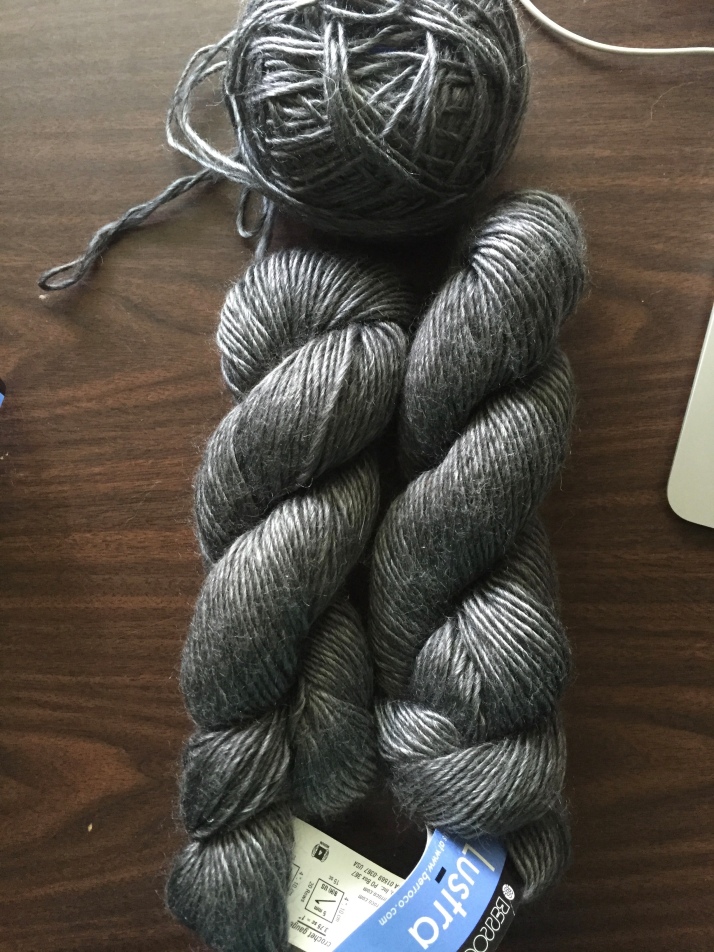 and one skein of a gorgeous deep teal.

Finally, I will share one last bit of exciting news: we have a new licensed driver in our house! The girl learned to parallel park on Sunday (learned it in one day, of course) and I took her for the test yesterday.

Yep, that’s the excited “I PASSED!!!” grin. She immediately took her brother to the grocery store to buy some cookies, and last night she was able to drive herself to band rehearsal while I stayed home. It was awesome, and terrifying of course, especially since she left her phone at home. She very kindly used someone else’s phone to let me know she’d arrived safely. I’ll still have to drive her around during the day when I need the car, but there will be plenty of times when she can drive herself. And she’s got a job and is saving for a car and once that happens, my chauffeur duties will essentially come to an end! Am I supposed to be sad, nostalgic for all our times together? Maybe I will be…someday. But today is not that day. Not when I’m taking her to band camp at 9, picking her up at 11 to take her to summer school, and then picking her up again at 3. Nope, right now I’m thinking her car can’t come soon enough!

Okay, friends, that’s all the time I have this morning. And all the stories, really. You’re all caught up. Nope, I don’t have a job yet. I’m applying and getting rejected and going back for more. That’s how the game goes, right?