Guys, this one really challenged me. I didn’t think it would. A friend requested a pair of crochet slippers made from flip flops (see the pattern here) then two more friends saw that request and requested some, and before I knew it, I’d agreed to make five pairs. Crazy, I know. But I read the pattern and it seemed simple. The supplies were cheap: I found flip flops at the dollar store, and Michaels had a great sale on Lily Sugar N Cream cotton over the weekend: 5 for $5!! 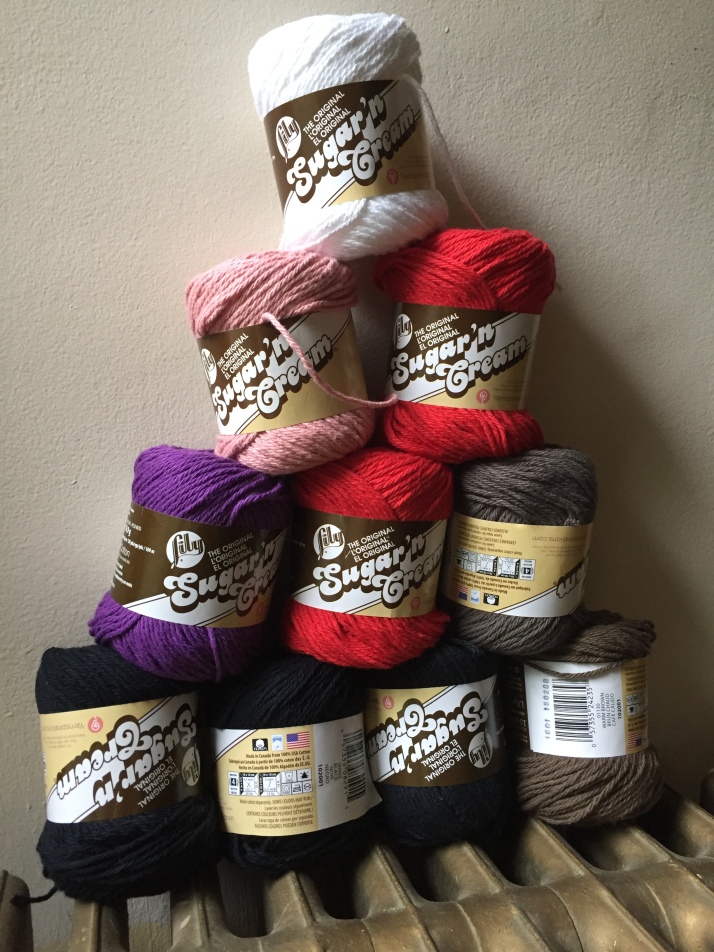 At the time, I thought I might make a pair for myself, plus I want to make a few new dishcloths and washcloths. Gotta buy the yarn when it’s cheap, right?

The husband had a nifty tool to mark the holes exactly 1/4″ apart as specified, then I used an ice pick to make the holes. It was a little tedious but not difficult. 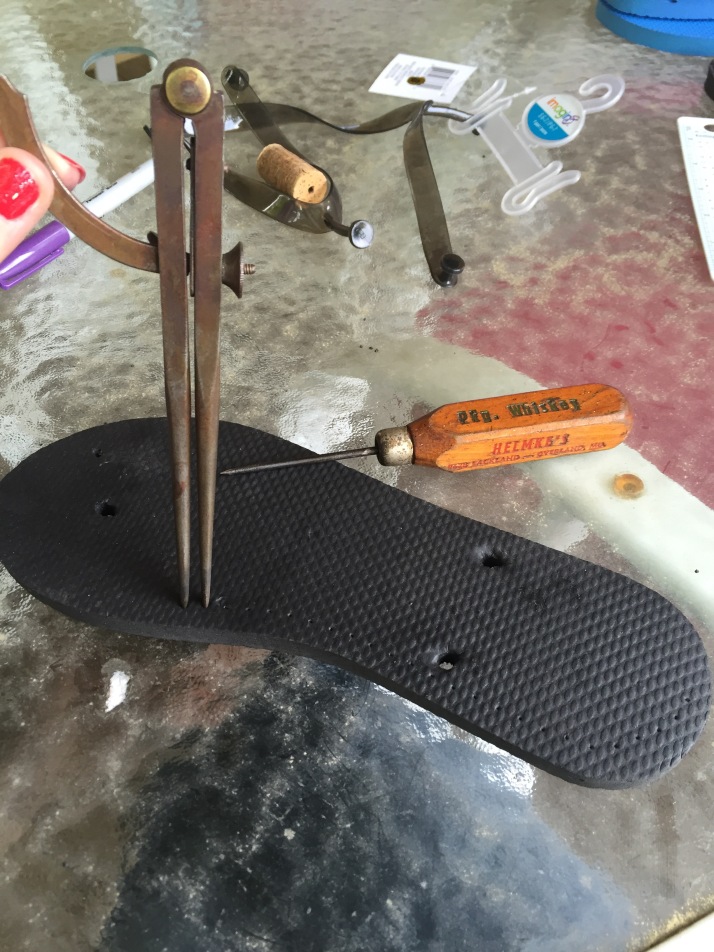 Then it was time to use the small hook (B, 2.25mm) to make the first round, and that was pretty hard to get used to. The holes weren’t quite big enough for the yarn, working around the rubber sole was awkward, and I did split the foam twice. But finally I got to switch to the bigger hook (G, 4.0mm) and away I went. I followed the pattern exactly. I kept going even when it looked suspiciously large, when meant that when I was done, I had this huge clog-type monstrosity. I frogged that without any photos. Second attempt included a decrease row and created this lovely…thing. 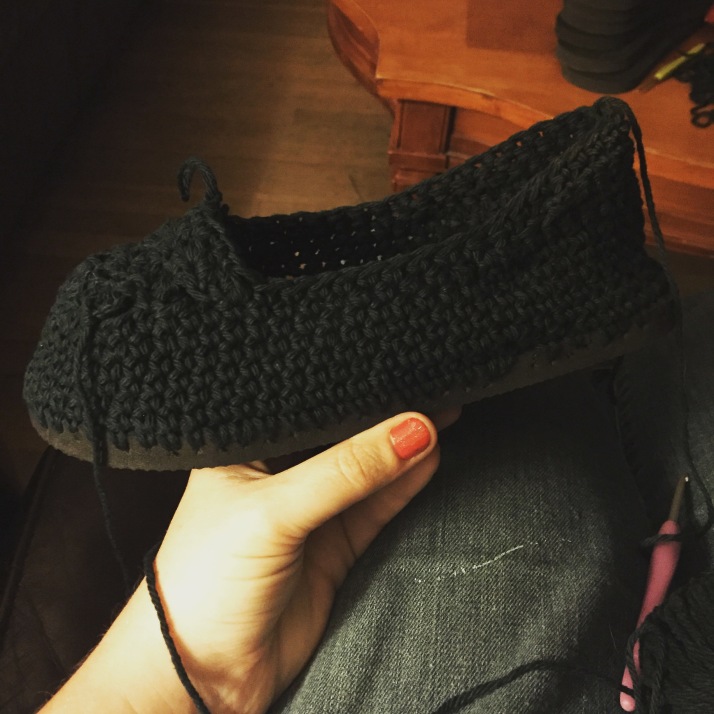 It’s not a great photo, I know, but I think you can tell it’s still rather tall. Also, it was supposed to be a size 7, and I could get it on my size 9 1/2 foot without stretching the cotton too much. Frogged again. This time I went back and read some comments, and someone else’s slipper came out super-size, and the author mentioned that maybe her holes were farther apart and the yarn was stretching more. So that’s a big thing right there: my holes were exactly 1/4″ apart and that was too close together. Let that be a lesson to you.

Okay, moving on. For the third attempt, I decreased the heck out of the body and only did six rows instead of nine. I made the tapered back one row shorter and left off one row of the decorative top. I *think* it came out okay. 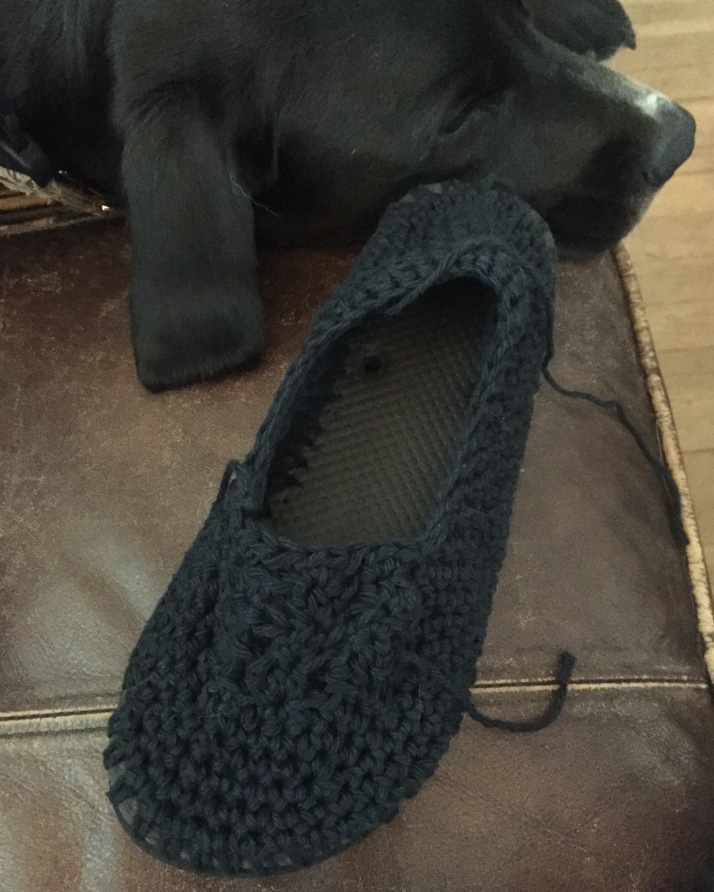 After that, the second one went quickly and smoothly, and I’ve decided these might be okay after all. This was the first time I ever seriously considered saying no to a request. Now, I’m not going to be making a ton of these for craft shows or anything, but I can definitely finish the other four pairs. 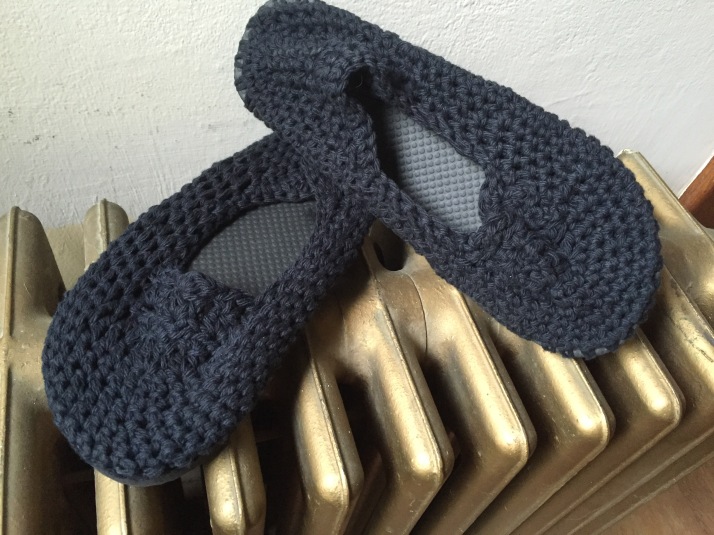 I can actually admit they’re kind of cute.