I’ve been on a roll lately! In the last couple of days I’ve completed two more WIPs, bringing me down to only three still on the needles. One of the new FOs was my Mother’s Day project, the Chocolate Cherries shawlette with the Baah wool. 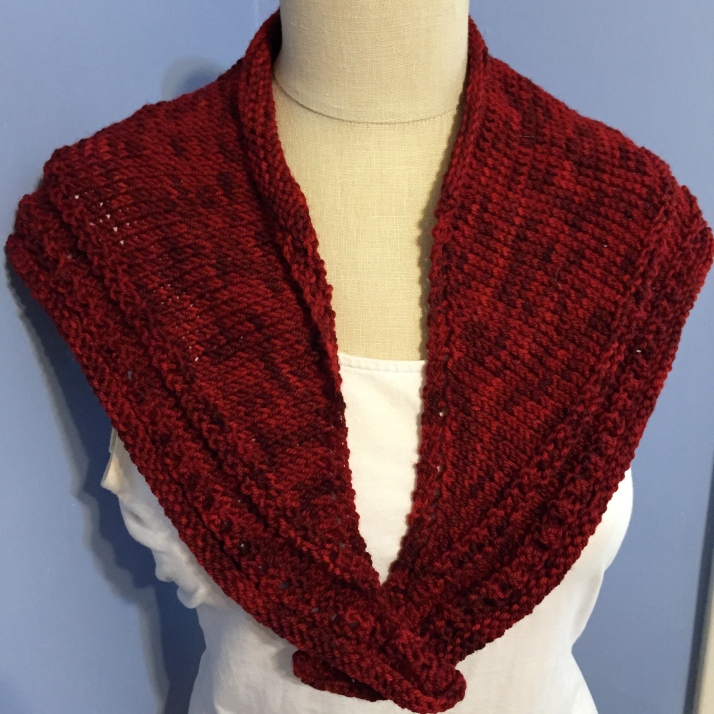 It hasn’t been blocked yet, so the yarnovers aren’t as open as they will be. I’m also hoping I can block it a bit longer, because I wanted to be able to wear it like this:

I absolutely loved knitting with this yarn. The colors are so gorgeous, and the yarn is perfect, soft without being limp. It has great stitch definition. I have another skein of this, and I’m looking forward to finding the right project for it. My Ravelry project page for it is here, or you can go directly to the Find a Penny pattern page.

My other FO is another Oh, Helen! mesh scarf. This one I made in a silvery-gray Berroco Weekend. It’s a worsted, not DK, so I cast on fewer stitches and used size 9 needles. I rather like this one better than the first, pink one. It doesn’t roll quite as much so you see the pattern better. I made this so I’d have something versatile and lightweight to wear when I do craft shows so I can model my wares!

I haven’t been knitting as much the last few days, though, because I’ve had another project going. For the first time in my adult life, the first time in the almost 18 years I’ve been married, I have an actual bed with a headboard and footboard! We’ve always just had the metal frame that comes with the mattress. We waited at first because of money, then the husband wanted to make them. I think he would still like to, but he’s got a lot of things going on, and it probably won’t happen for a while. Then a friend of mine mentioned she wanted to sell her bedroom set with a bed, dresser and nightstand. It just happened to be oak and the Mission style that I love and that matches the nightstands the husband made several years ago. She was asking a fair price and it just seemed like too good a deal to pass up.

The downside was that it meant quite a bit of manual labor, to move them home then clean out the bedroom and set up the new furniture. I took apart the old bed and set up the new one ALL BY MYSELF (okay, the boy helped a little bit) but I needed the help of the husband and brother to move heavy dressers. Last night it was all set up and I could appreciate my new grown-up bedroom! 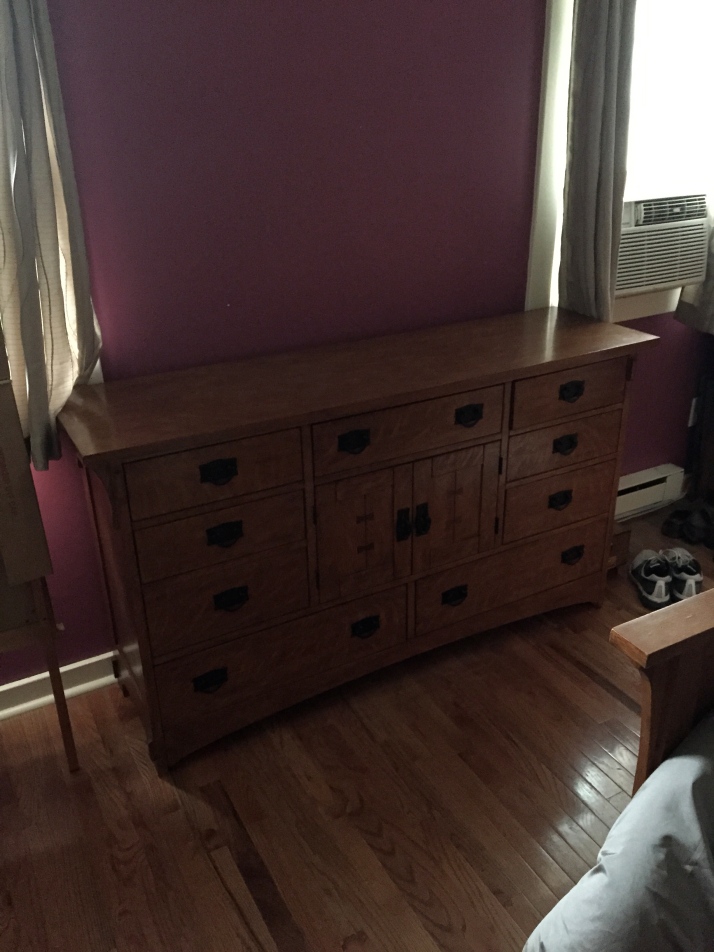 The dresser has a matching mirror, but the husband was too tired to attach it last night. Maybe tonight. Anyway, I’m delighted with it.

And last but not least, here’s a recent puppy photo. Remember the new dog bed Grace tore up? The one I mended and sprayed with the bitter apple spray? Yeah. Here it is.

I give up. I mean it, I really and truly give up. No more new dog beds. At least now I can look at this and chuckle. This was Monday, and nothing’s been destroyed since then. Fingers crossed we can make that trend last a while!

Fountain pen fans: I’m selling a couple I’m not in love with! The Pilot Namiki is a Faceted Vanishing Point with a gold M nib that I bought as NOS with original box & paperwork. Asking $225. The Lamy includes two red cartridges and a converter for $17. Both prices includes CONUS s&h! DM for more info! ✒️✒️.