I’m all about bright colors right now. I had a bit of mad money to spend (well, Mother’s Day money. Same difference, right?) so yesterday I went to my LYS to ponder all the things. I went in thinking I would buy more needles, because of course I have plenty of yarn. (bwahahahaha!) The nice woman greeted me, then asked me if I’d been in before. Seriously? I turned around so she could see my face and kind of jokingly said, “Once or twice.” (Yeah, once or twice a month maybe, for the last two years.) She just smiled and said ok. It wasn’t a big deal, mostly I thought it was funny. I know they see lots of people and just because I remember faces doesn’t mean everyone else does. Clearly I don’t go in there often enough, right?

Anyway. Yarn. I mean, needles. I picked up some Malabrigo yarn right way, then I found the needles I’d gone in wanting. They were a bit cheaper than I expected so I chose three lovely pairs.

Aren’t they pretty?? I don’t use straights too often but I’m desperate to cast on something for these right now. I’m trying very hard to wait until I finish a couple of my WIPs, though. (And I was wrong yesterday. I don’t have six WIPs. I have eight. Oops.) Once I decided on these, I thought I’d pick up a couple of 12″ circular needles. But somehow I got distracted by the luxury yarns. I put back the Malabrigo and instead I bought my first skeins of Lorna’s Laces and Done Roving Frolicking Feet.

This is going to be my very first Hitchhiker!! I can’t wait! I’ve been on this kick lately of wanting to make shawls, but little ones. Baby shawls. Shawlettes. 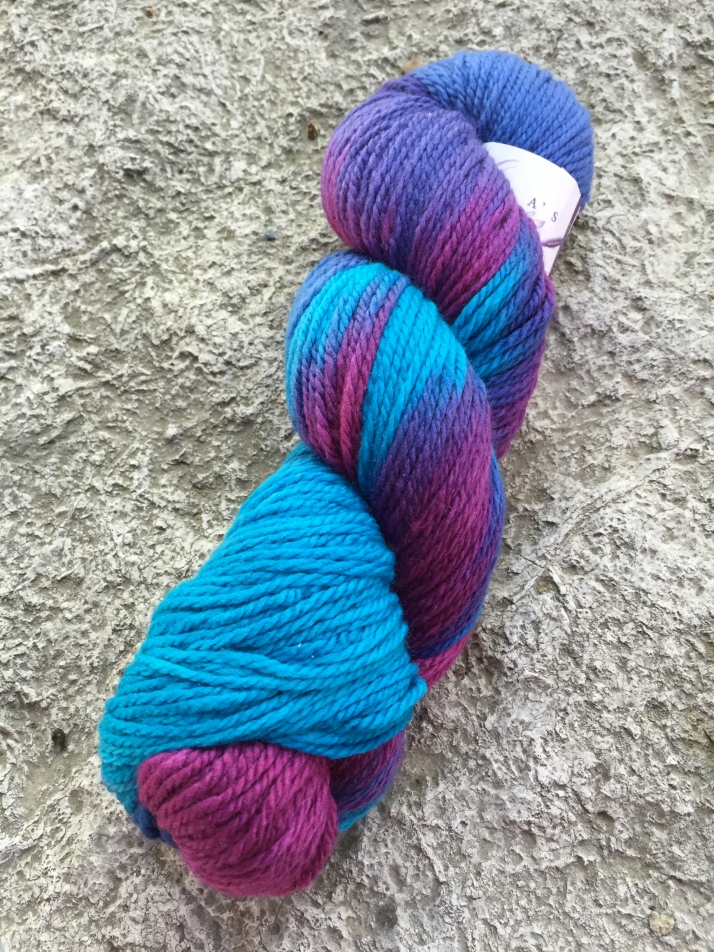 This is going to be…something lovely. I don’t know what. Until I do know, it will be decoration in the yarn bowl in my living room so I can gaze upon it and pet it once in a while.

While I was there, I decided to pick up a set of shorter DPNs for the hat I’m currently knitting. I do enjoy having the shorter needles when it’s time to decrease for the crown. But I learned something VERY important: once should check her needle inventory BEFORE purchasing new needles. Yep, I already had a set of 6″ DPNs in that size. Sighhh. And my LYS doesn’t allow returns or exchanges on needles. Of course. Fortunately, I think my wonderful Knitting SIL is interested in buying them from me, and I’ll give her a bit of a discount since she’s doing me a favor too.

Speaking of that hat, it had to go in time-out last night. I worked on it a lot yesterday and got almost halfway done, and was apparently getting too cocky about not messing up the 18-row lace pattern. Because of course then I MESSED UP. I have an extra stitch and cannot for the life of me figure out where it came from. I’d like to just knit two together and move on, but because it’s a custom order, I’m going to tink back two rows and see how that works. And then I might actually put in a stupid lifeline. Stupid lace knitting. 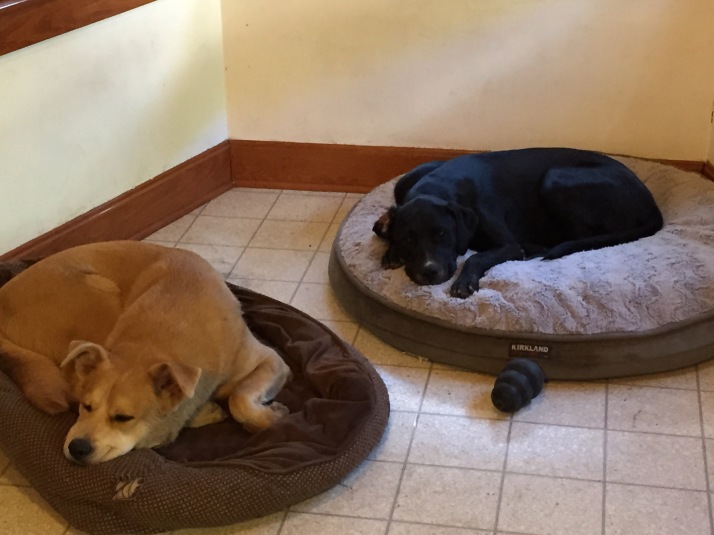 Don’t the puppies look all sweet and innocent? Yeah, they’re NOT. The last two mornings they’ve decided to wake us up before 5 a.m. and that’s not a lot of fun. But at least they haven’t destroyed anything lately (knock knock knock knock on wood).

One last thing: I know I’m always sharing good news about my talented girl musician, but for once I get to share about my talented BOY musician! He’s in sixth grade, playing the trombone for the first year, and he had his first solo contest over the weekend. And he got the highest rating, a 1! These kids boggle my mind. I have no idea how I got so lucky.

5 thoughts on “All the Colors of the Yarn”