It was supposed to be a quick project, an interlude, a break from my big WIPs. A Tangled Yarn blogged about Henry’s Hat, an adorable earflap hat, and it just called to me. I had to make one for my nephew, maybe two nephews, maybe more. I had the right yarn in my stash: Cascade Yarns 220 Superwash Aran in Dusky Green. The pattern was only $3, and we were taking a day trip with about an hour’s drive each way, so I gathered my supplies and cast on as we drove off. 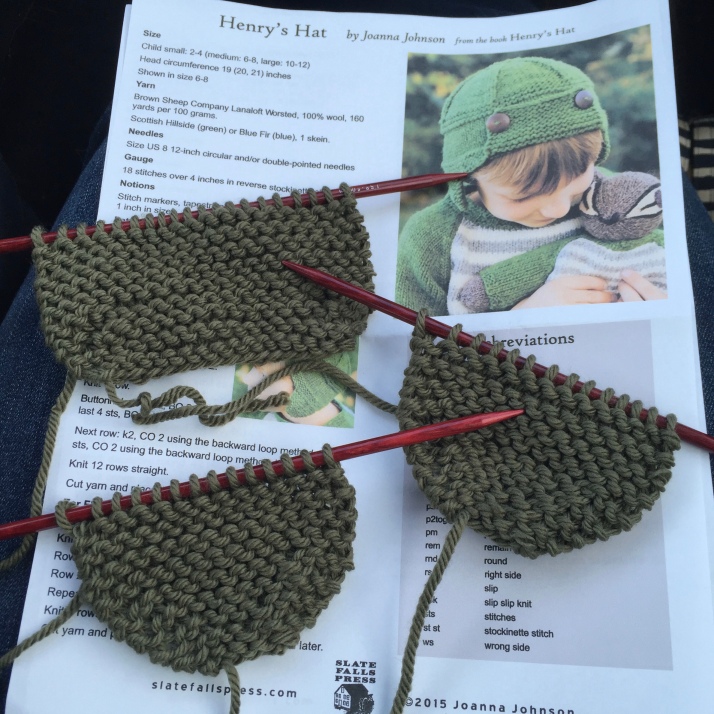 It started out well. The earflaps and front flap were quick and looked good. I pulled out the circs and knit around, picking up stitches on all the flaps, and started knitting around. Still, it was going fine. The pattern was simple, and despite Tangled’s experience, mine looked like it was going to be tall enough. I made good progress on the way home.

Last night was gymnastics, so I knit and watched and knit some more. It wasn’t until I hit the crown decreases that it occurred to me I was very close to running out of yarn, and that my hat looked big. Like, BIG. I’d chosen the child 6-8 size, since my almost-4yo nephew has a big head. But after a brief hesitation, I put the hat on my own head. It dropped down easily, the earflaps hanging below my ears.

This would NOT work. Not at all. It was late and I was frustrated, but I frogged back to the flaps so I would be ready to start anew today.

I just wasn’t sure how to proceed. I’d followed the pattern exactly, so why did it come out so big? Especially when Tangled’s hat came out small? I could try the smaller size. I could switch to smaller needles (and hope the hat body didn’t look too different from the flaps knit on the bigger needles). I could switch to worsted weight yarn instead of Aran, but I don’t want to waste the flaps that are already knit. So, without thinking about it too much, I started again at lunch today knitting the smaller size. And so far so good, but it’s still too soon to get a good sense of size. If it’s too big for my nephew, well, I guess I’ll find someone else who needs a cute hat and try again.

Have you ever had such a complete gauge fail?