Here, let me show you something I finished! I actually finished it a few days ago but was slow getting around to taking a halfway decent photo.

This is my Quickie Scowl. I used Classic Elite Chalet and Chateau, two skeins of teal and one of light gray, and that wasn’t enough. It’s shorter than I wanted. I blame it on needle size. The pattern calls for 10 1/2; when I made it the first time, I used 10s (no idea why), and this time I chose 10.75 because I wanted to use my fun Marblez needles and I thought the size would be close enough. And I do love the loose drape and the nice big yarnovers, but of course it’s wider than my first scarf, so with the same amount of yarn, it’s also shorter. I thought about sewing the ends together for a cowl which would be long enough to double, but I asked my daughter and she voted for a scarf, so a scarf it stayed. And it is a cozy, warm, close-fitting scarf indeed! 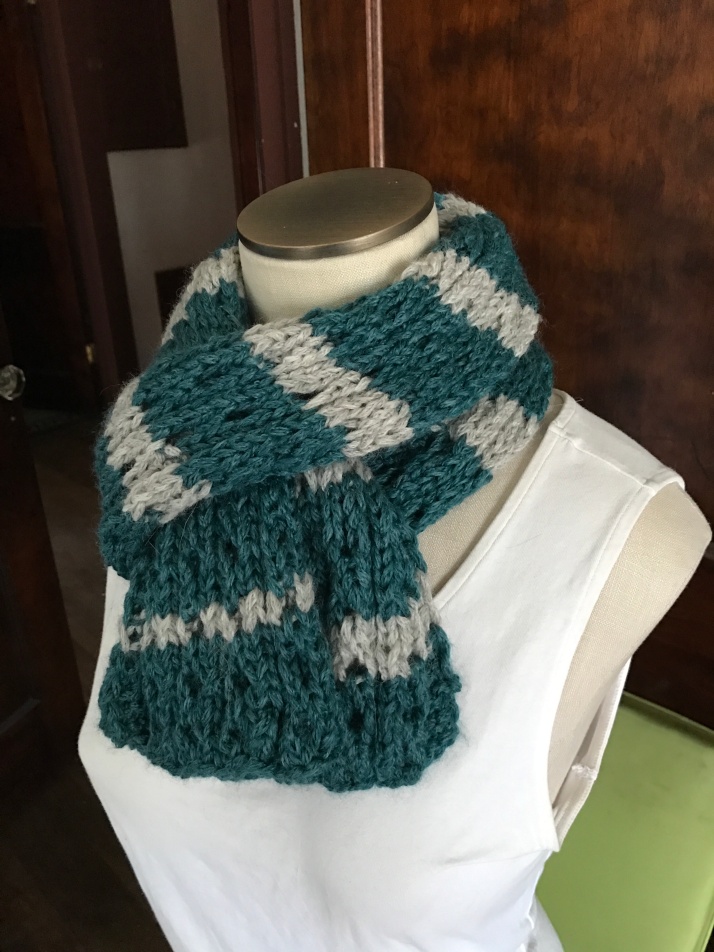 I did start two new projects yesterday, the ones calling my name, and boy are they fun! First I cast on for the Miss Winkle with my hot pink Frolicking Feet. It’s a Martina Behm pattern so there’s plenty of squishy garter stitch but also this nifty looped edge that is super addictive.

It’s also super hard to photograph! It was a little tricky to figure out, and I’m pretty sure I did the first one wrong, but eh, it’s a design feature, right? At first I thought I’d get annoyed by the fiddly nature of it, but it turns out I’m loving knitting this and want to keep going just to make more loops!

My second cast-on was the Gothic Lace cowl in MadTosh Vintage and that’s a delightful knit too. The yarn is thick and squishy and slides just right on my bamboo needles and the lace makes me think without being too complicated, and bonus: when it’s done I’ll get to pick out buttons to add!

And thankfully, the rest of my weekend is pretty empty, so I should get to work on these quite a bit. But once I get started on the margaritas tonight, I’ll probably switch back to the simple Hill & Dale cowl.

I think that’s a wrap for my 2016 blogging. See you on the flip side, and here’s wishing you all a happy, safe New Year’s Eve!

4 thoughts on “One Done, Two Begun”