I finally finished the Marcelle Wrap yesterday! Bound off in the morning, wove in ends, and blocked it last night. It’s currently pinned out and drying.

Grace is included in this photo for scale. It came out rather large, which was a surprise since I couldn’t get a sense of size when it was all bunched up on the needles.

I know I struggled a bit making this shawl, all faults of my own, but now that it’s done I’m delighted with it. It’s one of those projects where I can look back at it in pride that I was able to make something like this. 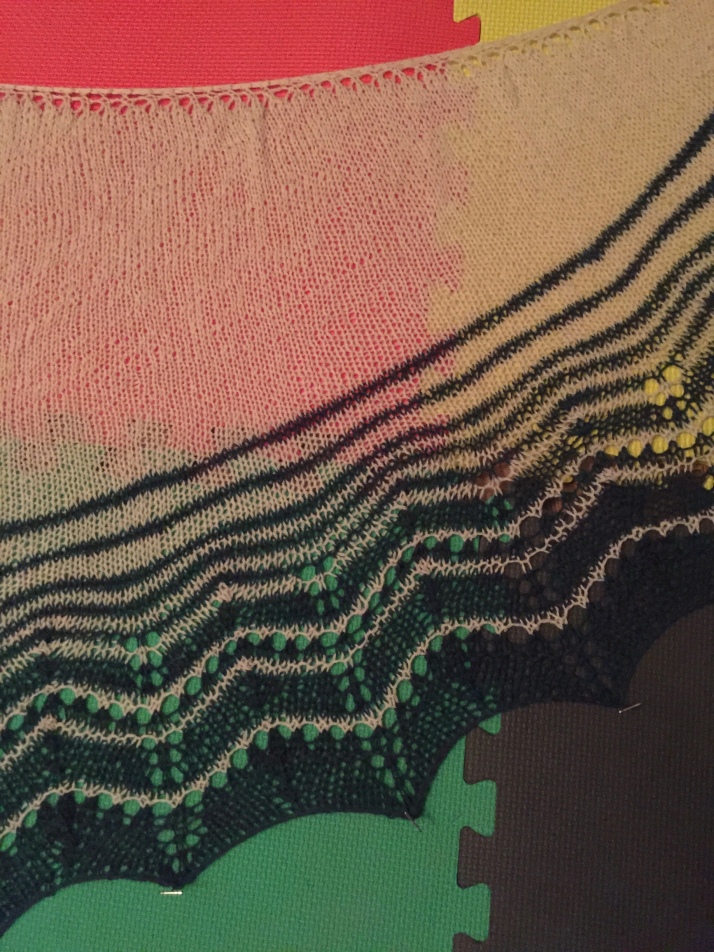 The pattern is the Marcelle Wrap by Little Church Knits. It’s well-written, a good shawl for an advanced beginner like me. My only comment is to buy extra yarn! Yarn is KnitPicks Palette in Oyster Heather and Rainforest Heather. I ended up using approximately 2.5 balls of the main color and 1.5 of the contrast color. No idea what I’ll do with the leftover bits but right now I’m tired of the colors and they can just go to the back of the stash.

I also finished the hat I was test knitting, so it’s drying and then I’ll do photos etc. I really should be knitting all weekend, because my knitting time is about to get cut drastically:  my job search is over! I got an offer on Wednesday, accepted it Thursday morning, and I start this coming Tuesday. Yep, that’s extremely fast, faster than I originally wanted, but it couldn’t be helped. I’m going to be an administrative assistant at a medical research institute, and I’ll be supporting two new scientists. The first is moving his lab in on the 11th, and they wanted me to at least be partially trained before he arrived. The second arrives in early August, so I’ll get to ease in a bit before she arrives. I’m really excited but also terrified. Intellectually, I know I’ll be able to do the job just fine…but still, it’s new and different, and that’s always a little scary too. So you probably won’t hear from me quite as often, at least while I get settled in, but I’ll do my best.

For now, I must run and sweep the floors. We’re having a birthday party here today: my “baby” is 13 now! Yep, I have two teenagers in the house. Thank you, your sympathies are much appreciated.

U.S. friends, have a happy and safe Fourth of July!

Fountain pen fans: I’m selling a couple I’m not in love with! The Pilot Namiki is a Faceted Vanishing Point with a gold M nib that I bought as NOS with original box & paperwork. Asking $225. The Lamy includes two red cartridges and a converter for $17. Both prices includes CONUS s&h! DM for more info! ✒️✒️.