We took a baby road trip this weekend. We’re gearing up to start painting our house this summer and found some used scaffolding on Craigslist. The listings nearby kept getting snatched up quickly, so we drove about three hours to the southwest part of Missouri, near Springfield. It was gorgeous, green and hilly and lush. I do love it down there. Our destination was pretty rural, and I was delighted to find they had a nice menagerie for me to play with while the guys messed with the scaffolding. They had four dogs, three cats (that I saw; he said there were around 18), a bunch of chickens, a horse, and five goats. Molly, a “smaller” Great Pyrenees, was my favorite. She was so sweet and mellow, and I ended up sitting on the ground cuddling with her for much of the time.

I really wish I could have taken her home with me, and they would have let me too! They said they got her to be a guard dog but she ended up being the runt of the litter. But for some reason my hubby thinks two dogs is enough. I know, what’s wrong with him, right? I did get him to agree that once he retires, if we move out to the country with a bit of land, I could have more puppies. Hooray! I might actually like that. I mean, I’m not very social and don’t like many people. I spend most of my time in silence and love it. I love the wide expanse of open land. Would I like it long-term? Not sure. I’d definitely have to be relatively close to civilization. So yeah, we have that to ponder for the next several years. Think about it: more puppies! Yay!

Okay, enough about puppies. How about kitties? We stopped at a few antique malls and one of them had this little beauty. She was a miniature version of a cat I used to have.

Bonus: the hubby agreed that IF we moved to a country-ish location, I could have outdoor cats! (He claims to be “allergic”. Whatever.)

Of course I also found a yarn store while we were out and about, though we had to drive a bit out of our way to get there. It’s in Rogersville, MO, near Springfield, and it’s called One City Market. It’s in a cute little house and I walked in and there was a small room full of gorgeous worsted and bulky wools, like Lorna’s Laces and Vice Yarns and Baah! and Malabrigo and so much more. It connected to another room which had the wool fingering/DK weights, also yummy colors and brands, including some small indie dyers. I picked out two skeins, only two skeins, trying to be very very good and went to the counter…then I spotted another room. Oh, yes, she said, that’s the cotton blends, and some closeout yarns. Oh well. Crap. I descended into the rabbit hole of her closeouts. I mean, good grief, it was crazy good. Brands like Rowan and Cascade, and wool and cotton and more and more. It was all packaged together in ziplock bags, some with multiple skeins of one yarn, some with multiple skeins of the same yarn in different colors. And the prices? 65% off retail! So much for being good!

What did I bring home? Well, let me show you some pictures! And I’ll preface it by saying I’ve been playing with a new technique called the flatlay. I got the idea from Jem Arrowsmith Knits, who has been taking an Instagram photography course with Makelight and producing truly gorgeous photos. I’d love to do the course at some point but right now the budget says I can just play with a few of the ideas. I have TONS of scrapbooking paper for interesting backgrounds, and like Jem, I had a marvelous time collecting trinkets to jazz up my photos. Unfortunately, when I actually had time to take photos, it was so stinking dark from a severe thunderstorm that I had no natural light. So these are very rough beginning-stage photos.

I started with some Dream in Color Classy in Cashmere in color Charged Cherry, and it’s the hottest hot pink you ever saw. And soft, so soft and squishy.

It really is much brighter than it looks here. I kept this photo because I like the pieces together, but I’d love to re-take it in natural light.

Now for my clearance finds. I got six skeins of Cascade Sierra, a bouncy blend of cotton and merino, three pink and three orange. I can’t wait to knit the two colors together; I just haven’t decided whether they want to be a shawl or a lightweight scarf.

Pink is my color right now, apparently, because I also got a bag of SMC Select Juliette, six skeins in a dark raspberry hue. It’s 100% cotton and labeled bulky but looks more like Aran weight. My favorite deal was a bag of 9 balls of Rowan RYC Cashsoft Aran. It’s mostly merino with a bit of microfiber and 10% cashmere. Soft? You betcha! And it’s a gorgeous red that will be fantastic for holiday knitting. I got all of it, 855 yards, for $28! WHEE! I mean, that could be a really sweater vest…if I had the patience to knit a sweater. (Spoiler: I don’t.)

I could have bought so much more but managed to stop the damage at that, and even that was more than I should have bought. Still, I’m delighted with my finds and can’t wait to cast on with all of it. And speaking of actually knitting, I did some of that too, and I bound off the Citron shawl last night! 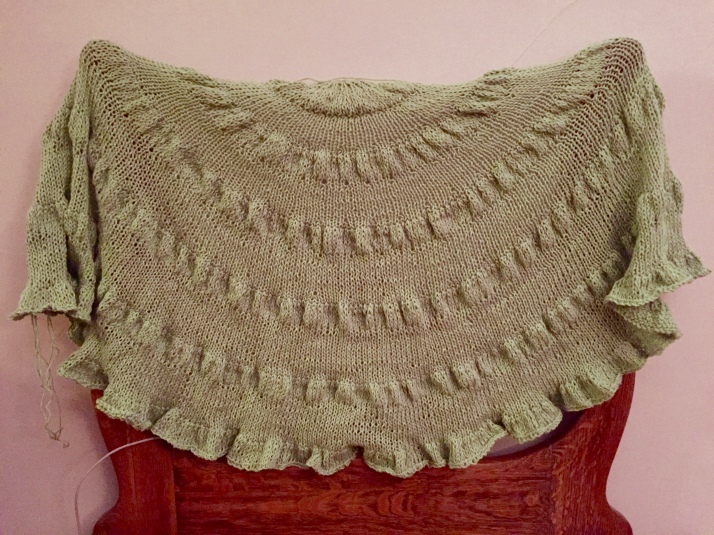 I was all “Meh” about it until it came off the needles, and then I realized how lovely it actually is! I love the ruffled edge, even if it is shorter than it’s supposed to be because I ran out of yarn. Again, the color isn’t true but I had to share it. Once I get the ends woven in and a day that’s not so gray, I’ll post a better photo.

Whew, this was a big post, wasn’t it? That’s what happens when I save it all up instead of doling it out in small daily doses. If you’re still reading, thanks for sticking around!

13 thoughts on “Weekend Adventure, With Yarn”