Much progress is being made on my sister’s bag. I’ve got the body done and now I’m knitting the flaps that will be used to attach the handles. It’s not the most interesting part of the knitting, but it’s still kind of exciting. So close! Since I have no other knitting-related photos to share, I’m going to post one photo of the bag. It’s inside out, though, so you can’t really see what the pattern looks like. Or maybe some of you master knitters can, I don’t know. The main thing is, my sister won’t have a clue. I like to keep her guessing.

I don’t have more knitting to show you because it’s May, y’all. And that’s a busy time of year for people with active school-age children! We’ve had so many concerts and orientations and end-of-year events, it’s crazy. Plus there’s Mother’s Day and at least four birthdays. This past weekend we started off with an audition for the girl. It’s her third year auditioning for the Kansas City Youth Symphony.

The first year she didn’t make it, last year she was an alternate, so I have a good feeling about this year! She also auditioned for the Metropolitan Youth Orchestra this year for the first time, so I’ve got my fingers crossed that one of them works out. We only have to wait 2-3 weeks. (UGH)

That same night, she had Oscars night at school for the theater department. She was presenting an award with a friend, so they color-coordinated. And Jack had to be part of the party, too.

Yesterday was her end-of-year recital. Her flute teacher partners with two piano teachers to present an afternoon performance, and it’s always fun to see the kids play. The little ones are so cute and earnest, and there are some older ones who are truly talented. (“Like mine,” she whispers)

But now! Now I think we’re done. That was the last event of the school year. Now we can just relax and hang out, and I don’t have to drive 50 million people from here to there and back again. Whew. They do a lot of cool stuff, but by this time of the year, I’m tired. Not sure I’m ready for full-time at-home kids, though! I guess we’ll muddle through somehow. And I know the puppies will be happy to have their kids home. Speaking of puppies, Grace was at it again. Look what she did. Just look! 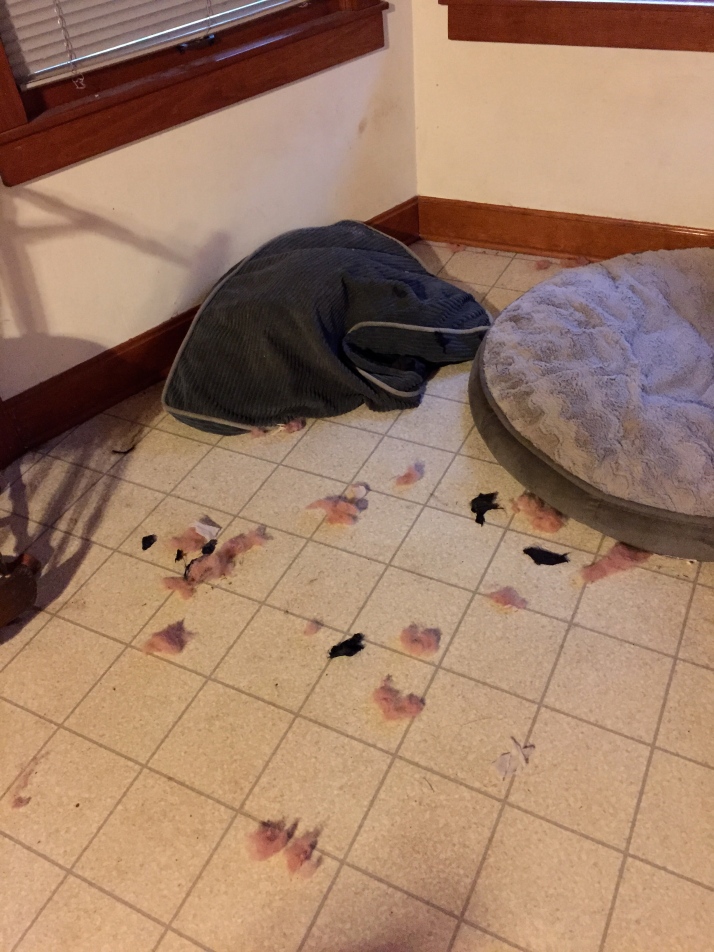 Yep. Dog bed as chew toy. The worst part is, this was the second one she chewed up in as many days. Granted, these were both older beds and almost worn out and probably had a small hole here and there to tempt her. But still. These were Jack’s beds. Last night, I put them to bed and tried to get Jack to lay in Grace’s bed but he wouldn’t. He laid down on a towel I’d put down and Grace still got her bed. Such a gentleman he is. Now the question is, do I go to Costco and get another dog bed, or would that be tempting fate?

2 thoughts on “Fine, you can peek”