Yep. Yesterday’s favorite WIP, the pink and gray infinity scarf, has been frogged again. 144 stitches was not long enough to double. And I kept going back to the pattern and the projects and I could not (can not) for the life of me figure out why my project is not working right. Everybody else was able to knit it with 50 grams or less of the accent color, so why not me?? Well, I did figure out part of it: I was using size 10 1/2 needles instead of 10; I just accidentally grabbed the wrong tips from my interchangeable set. Would that be enough to use up that much more yarn? Seriously. I don’t have a clue. Now, the pattern calls for sport weight, and I’m using DK, but other people have used DK with the same stitch counts and same amount of yarn, so I should be able to as well. So here’s my question: should I knit to the pattern with the 10s? Or should I go down a needle size? Will that use less yarn? You’d think I would know these things but I don’t so I’m counting on some of you knitting experts to help me out here.

Since that project stalled, I did go out to my LYS yesterday and it was very refreshing. I got to wander on my own for a while, and then the nice lady asked what I was working on. Well. I’ve been wanting a white and black striped cowl for a while now, and my SIL and I both want to make one with chevrons. I want to use a natural fiber. Well, she showed me every yarn she could think of that might work. Some had white but no black, some had black but no white. Some I liked, some I…didn’t. Some I liked but didn’t want to pay $14/skein. I told her I’d ponder for a while and kept browsing. This store is unusual in that it’s in a big warehouse, and it’s actually two yarn stores in one with a tape line dividing the two. I ended up on the other side (because you have to look at *all* the yarn, of course) and happened upon some Cascade Ultra Pima. DK weight, black and white, natural fiber, nice sheen, $10 for 220 yards. It was perfect for the warm weather cowl I’m envisioning. I felt bad buying from the other store when the first lady had spent so much time helping me but it was the right yarn, and that’s the most important thing, right? I did buy some Plymouth Baby Alpaca Grande from her because it was on sale. It’s just awkward sometimes, having two stores in one place. We knitters are nice, thoughtful people, which means we are more likely to spend more so nobody feels bad. Maybe that’s their plan?!?

Okay, okay. I got home with my new yarn, and in talking to my SIL, we decided we both wanted a reversible cowl, one knit like a tube so the stockinette was all the way around. I played around with a lot of stitch counts and pattern repeats until I finally FINALLY ended up with something that pleases me. 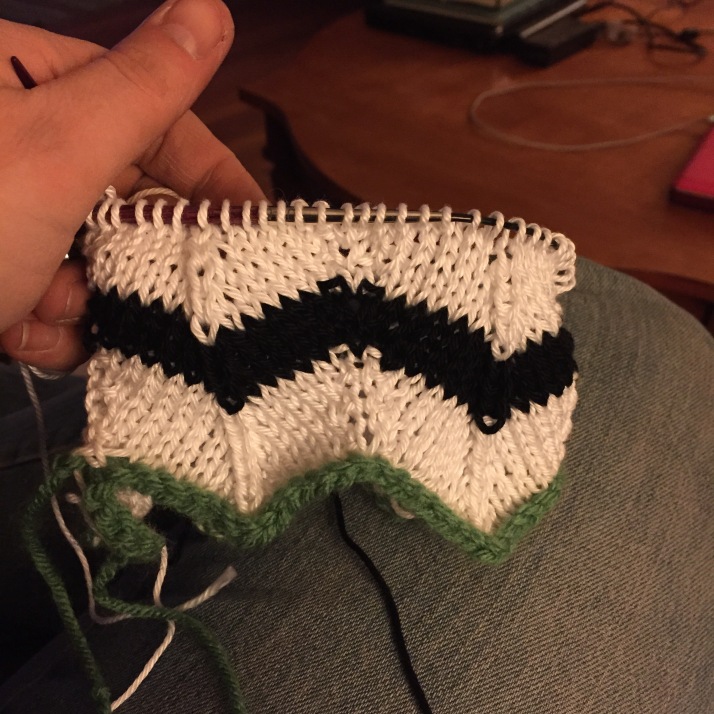 It’s fun, and it’s really cool that I just doing these simple things and out comes this nifty pattern. I mean, it’s just increases and decreases! How easy is that? Plus! Since it’s knit in the round, I don’t have to worry about carrying up the yarn neatly because it’s all inside. I did have to learn the provisional cast on, which was fine since I crochet and have picked up stitches before. And I will have to learn kitchener at the end to graft the two ends together to make a seamless circle. But I’m not thinking about that right now. So yeah, this is my new favorite WIP. It will travel around with me today on all my errands, and maybe tomorrow I’ll have lots of progress to show off.