The poison ivy was not just two little spots. It is now several spots up and down my inner arm. There’s even one on the inside of my upper arm, right where it brushes against my shirt and itches and itches and itches. My mom recommended wiping it with a rubbing alcohol/water mix to neutralize the poison, so I’ve done that, but it doesn’t seem to do anything for the itch. So far I’m relying on calamine and it’s helping. I’d like to not have to go the steroid route like I have every other time I get this stupid stuff.

The Doctor Who tote bag has gone to its new home and the teacher seemed thrilled to receive it. She even said I was an “artist!” Not really, but it’s nice to hear! It’s fun to make things for people, especially when they’re not expecting it. In that vein, I decided to make a gift for a friend of mine. I’ve had a lot of struggles the last three years, and this friend has been wonderful. She is supportive, kind, and encouraging. She’s a great listener and offers smart, objective advice. I don’t see her as often as I’d like, but I enjoy it every time I do. She loves the Kansas City Chiefs, and has season tickets, so I decided I’d give her something to help her stay warm. She doesn’t strike me as a hat person, so I picked out an earwarmer pattern first. 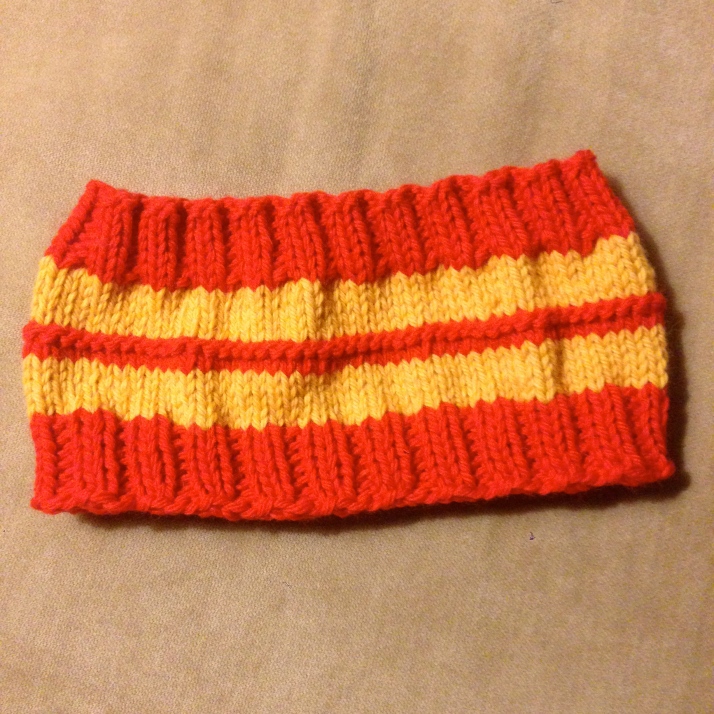 It’s simple yet has a few details that make it interesting, and it lent itself well to the striping of the Chiefs colors. The first time I tried to do the red purl row, it looked weird. Not sure how to describe it, but just doing one row of red didn’t give the effect I wanted. So I frogged back, picked up the red a row earlier, and knit one row, purled a row, and knit a row before going back to the gold.  This was a lovely quick knit.

Fingerless gloves were next. I picked a pattern I’ve used before with success. They’re called Vancouver Specials: Half-Mitts and they’re just a basic mitt with ribbed cuffs. My first attempt, using the size small, was too snug, so I started over with the medium, and I think they’ll be perfect. Unfortunately, I realized as I was binding off that I forgot to pick the red back up for the top ribbed edge like I intended. I think I’ll just make the other glove in reverse colors: a gold cuff with red body.

These were done with Knit Picks Wool of the Andes Bulky. It’s my first experience with Knit Picks yarn, and I was pleased with how it knit and how the finished project feels. The wool isn’t terribly soft, but not terribly itchy either. I’d love to do some felting with this yarn next!