Do you remember that I adopted a new dog?? Well, I know you’re probably itching for an update (haha probably not but I’m going to blab about him anyway) so here goes: he’s awesome!

I mean, he’s also kind of a butthead at times (he likes to push the other dogs out of the way to get attention) but he balances it out pretty well. He loves attention, loves pets and belly rubs, loves to flop on top of me when I go to bed at night and snore away. He doesn’t chew things up (although he did try to bite my Wonder Woman shawl while I was working on it last weekend. We had a serious conversation after that incident. I think he understood the gravity of the situation and it has not happened again).

He loves to play fetch, is the only dog to play with a ball, and he gets my dignified lazy pup Jack out roughhousing and wrestling. And when Jack is tired of it, Duncan moves on to Grace, who is delighted to have someone who will run around and around and around the back yard with her.

As I mentioned before, he’s had a bit of a potty issue, leaving us a puddle when we’re gone all day at work/school. I really don’t want to kennel him for a variety of reasons, so we’ve been working with it and hoping it’s partly because he’s adjusting to living with us and partly because he is still a little young. We’ve had a few dry days, so I’m encouraged that we’re at least moving in the right direction.

And I am encouraged for another reason too. When we adopted him, he had a small wart on his muzzle, and they said they hadn’t tried to remove it because he was recovering from kennel cough. The wart kept growing, and tiny ones popped up around it, and he had this really gross, bulbous growth. It didn’t seem to bother him at all, but then the more he played with the other dogs, and the bigger it got, it started getting…slightly injured. We took him to the vet and found out he has papilloma virus, similar to what humans get, but the dog version can’t be passed to humans. It’s apparently more common in young dogs, often regresses on his own, and surgery wasn’t really recommended. Okay, fine, we could wait it out. Well, the dogs kept playing, and the wart got injured again, and looked really red and painful, even though he was acting fine. Back to the vet, who said they could remove the warts, but it wasn’t hurting anything as it was. Okay, fine, we’ll give it a few more days and see what happens. That was about a week ago, and it’s gotten so much better! The main wart is much smaller, the tiny ones are almost gone, and the one on his paw is much smaller! I hate to be superficial, but he really is so much cuter without a large wart on the side of his face. 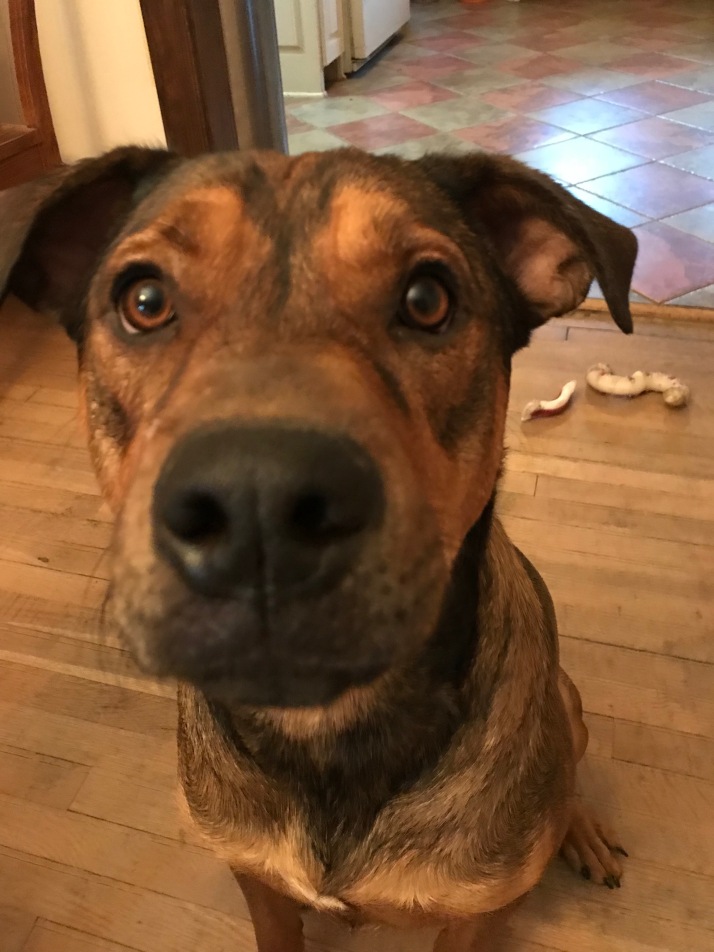 And I am loving having three dogs. Yeah, we get more dirt and dog hair on the floors. Yeah, we’re spending more on food. But every day I come home to these three happy pups and my stress disappears. We sit out in the backyard and I love to watch them frolic. I come out of the bathroom and there are three smiling doggos waiting for me. (Yeah, that one’s a little weird, but still cute.) They’re noisy and messy and there’s always at least one dog underfoot…and I love it.

But three is my limit, I’m pretty sure.