I feel like I’m running in place with my Christmas knitting. I finish projects but I still have ones waiting in the wings, so I don’t feel like I’m getting ahead. But still, I did finish two projects the other day, and that’s a relief. The first is the pair of Lightning McQueen mittens, the project where the first mitten came out too big and I had to frog it and reknit it. My second try was much more successful. 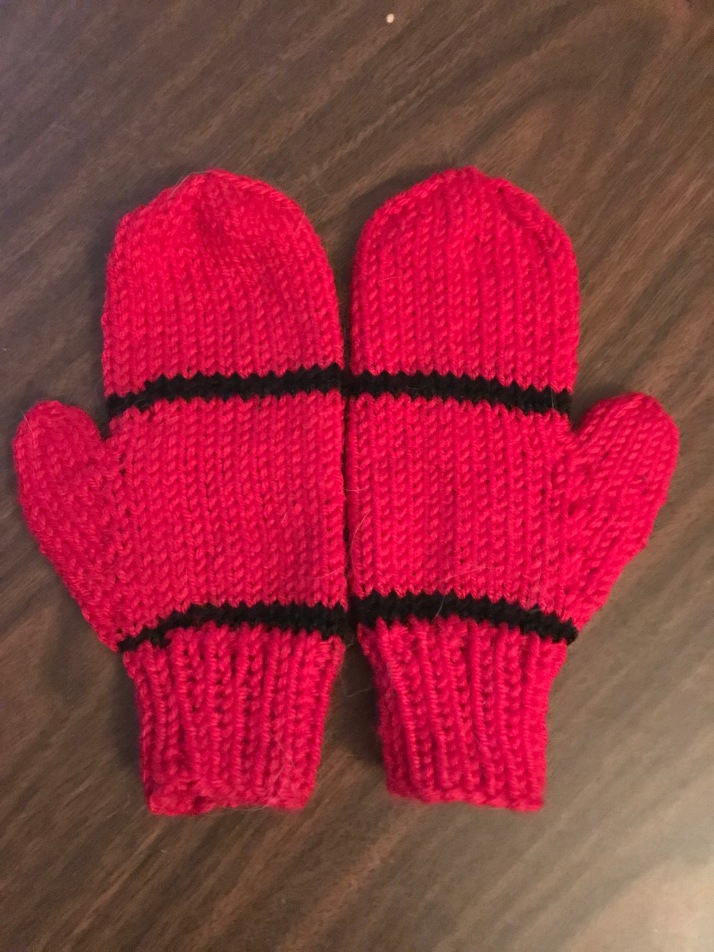 Hooray, two matching mittens! These are actually a birthday gift that I’ll give today, so here’s hoping they actually fit the little boy they’re for. Pattern is World’s Simplest Mittens by Tin Can Knits.

My second FO is a pair of Christmas-gift socks, the Strutting Peacock socks that I’ve had on the needles since mid-November. (Feels like longer.) This wasn’t a fun knit for me. I don’t think I like the Knit Picks Chroma for socks, at least not for socks with twisted stitches. The colors are pretty, and the final socks do feel dense and warm, but the yarn sticks to itself a lot, making tinking and frogging difficult. I bought more colors in the big sale, so I’ll try another pair with a simpler pattern and see if I like it better. 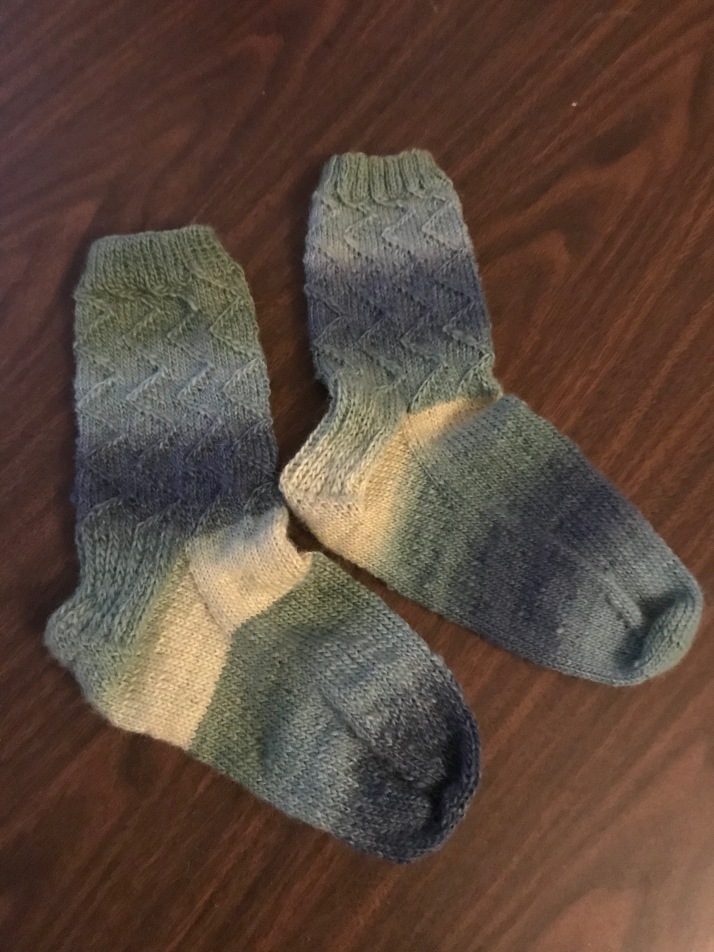 I do like the look of the pattern. It took a little while for me to memorize, but I was able to do the second sock mostly without the pattern. My only modification was to do a stockinette foot rather than carry the pattern down, to make for faster knitting. I think I’d like to try this pattern again with better yarn.

Last night was a band concert, the girl’s last District Band concert. She played beautifully, they sounded wonderful, and I had lots of knitting time. I chose the simplest of knitting so that I could watch her while I listened and knit, and made good progress on my Scrappy Cowl.

This is a pretty fun project. I think I’m going to like this cowl a lot! But for now I’ve set it aside because I need to focus on more gift knitting. The boy has a girlfriend, and he would like me to make a cowl for the girlfriend. I like the boy, so I will do my best to complete that along with the other two gift projects on my list! Are you done with your gift knitting yet?

I’ve got a new project on my needles, a scrappy cowl. I needed something completely and totally mindless, something I could knit without looking at 95% of the time. Sometimes at work I go to seminars and talks, and I’m listening but my hands are free, and I wanted a project that I could work on without people thinking I’m not paying attention. Thus, my scrappy cowl idea!

The one pattern I looked at suggested tying them all your scraps together to make a yarn ball, but I don’t have the patience for that. I’ll just tie them together as I go, and randomly pull balls from the project bag when I need a new one. I want it to be as random as possible, because it’s really hard for me to relinquish control, even over something as simple as color order. Some of my scraps are bigger than I’d like, so I might not use them all at once. I haven’t really decided yet. I know for sure I’d like to use up all the little scraps, because what else am I going to do with them?

There’s no complicated pattern here. I did a provisional cast on of 56 stitches on 16″ size 8 needles, joined in the round, and started knitting. I’ll knit until it’s long enough to wrap twice or I run out of yarn, whichever comes first. No, that’s not true. If I don’t get it long enough to wrap twice, I’ll just leave it unfinished and add to it as I finish other projects. And someday I’ll have a weirdly beautiful cowl that will go with everything and nothing!