We got our new puppy yesterday! I got tired of waiting to hear from the volunteer-run rescue shelter place, so we drove out to the Great Plains SPCA just to see if anyone caught our eye. We made it all the way through before this little black Lab looked up at us. All the other dogs were barking and she was just watching us. She had this pretty white streak on her chest and little white socks on her back paws. She was a little over nine months old, young like we were looking for, and seemed friendly enough. We arranged for a meeting and she was bouncy and playful and affectionate, and it didn’t take long for us to decide we needed to bring Jack up to meet her. The meeting went well, though they didn’t play immediately like I was expecting. She was a little more aggressive than he was, and he didn’t appreciate her nose going where it went. But they didn’t dislike each other, little growling, no hackles raised, so we figured what the heck, and brought her home.

Her name is Grace, and she’s 59 pounds of sweet sass. She’s not quite 10 months old yet so they expect her to get a little bigger. Right now she’s about as tall and long as Jack is, but he’s much stockier. She seems lean and streamlined compared to him. 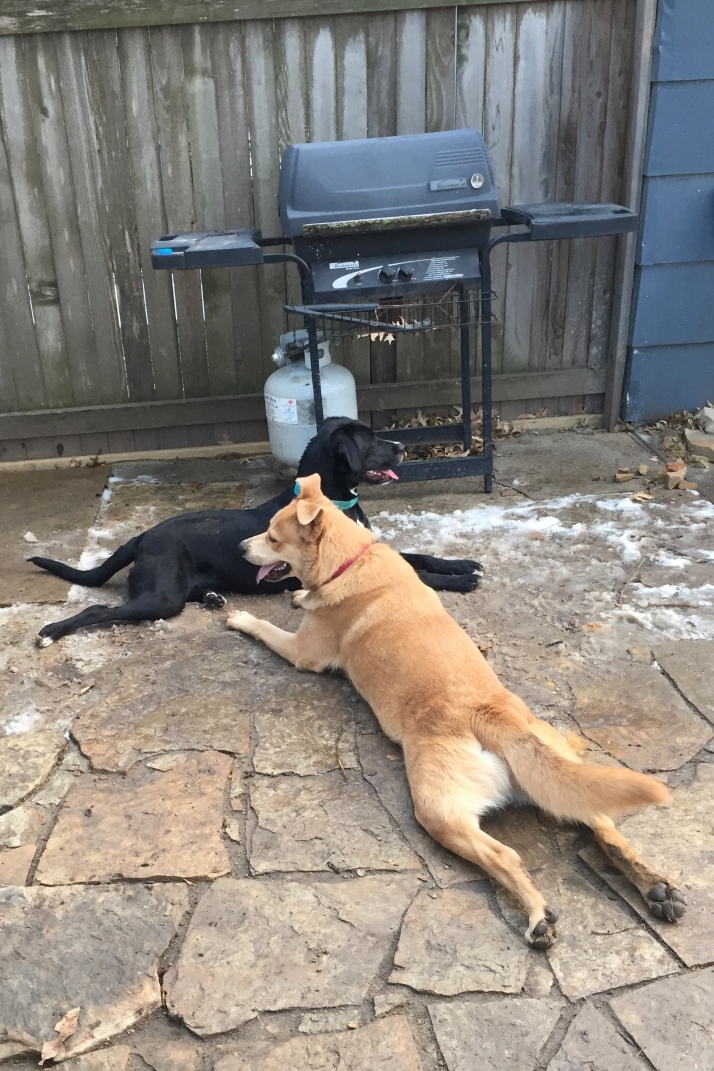 As soon as we got them in the backyard together, they started wrestling, and pretty much haven’t stopped. They’ll take a five-minute break and then they’re back at it. I love that they’re getting along so well, but I had no idea how much space two crazy puppies would take up! Three dogs? Fuhgeddaboudit! But these two seem to be having a ball, so I can handle it. I kind of wish they’d chill out a little bit now and then, but it’ll happen eventually.The best news for me was that they did fine overnight together. Jack has a bed in the kitchen, so we put another bed in there for Gracie, and after a few thumps, it was quiet all night. I woke up to two very bouncy, happy puppies. And a puddle too, but hopefully that won’t last long. She grasps the concept; I think Jack just needs to leave her alone long enough to let her pee when they’re outside.

Really, it’s going better than I expected. I know there’ll be some tension over toys and sticks, but they had breakfast in the same room without too much trouble. The only sad part is that I seem to have lost my cuddle puppy. He won’t lie on the couch with me and when I got up, he didn’t even roll over and ask for his ten-minute belly rub. That’ll come back, right? I sure hope so!

And they do wear each other out, that’s for sure! This is Jack last night after three hours of almost non-stop wrestling: 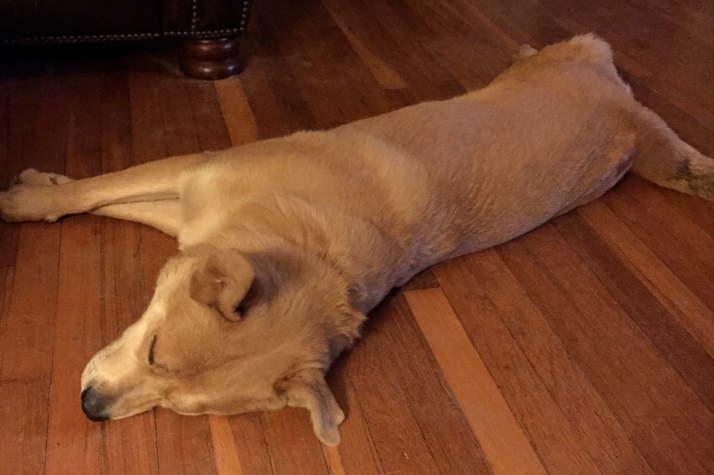 It’s been an adventure already, and I think we’re in for a lot more. I’ve got more dirt and noise than I had before, but I’ve also got a lot of sweet moments.

If you’re thinking about a new furry friend, please check out your local animal shelters first. There are a lot of wonderful dogs out there, and mixed-breeds can be just as fantastic (if not more so) than a pure-bred with papers. In the Kansas City Metro Area we have three big ones: Wayside Waifs, Great Plains SPCA and the KC Pet Project.