Every time I get a new dog, I forget what it’s like to have a young dog that is so much like a toddler. They aren’t potty-trained, they need lots of attention, they need lots of toys, they destroy things, and they often don’t sleep well. Duncan was or is all of these. Thankfully we’ve gotten past the potty-training issue, but everything else is still relevant. Sleep has been bad since Grace started her meds for Addison’s; the steroids make her eat more and drink more and thus need more potty breaks. Also, either they’re giving her more energy or she’s just feeling better, because she’s been sort of bonkers at times. So for the last couple of weeks especially, they’ve been restless between 3:30 and 4:30 in the morning. Sometimes they barked so that we’d get up and let them out. Friends, that is not a good time for me to wake up.

Last week was an especially bad week. The girl was out of town for a band event. She was gone three nights. Duncan and Grace usually sleep in her room. We didn’t want three dogs in our bedroom so Jack slept in our room and we left the other two downstairs, assuming Duncan would behave because he’d be SLEEPING.

Oh, how foolish we were.

That very first night/morning, there was barking at 4 am. I got up, went downstairs, let them outside, and saw paper all over the floor of the dining room.

It was books, guys. BOOKS. Not just any books. Oh no, MY dog of course likes OLD books. Old, valuable books that smell and taste interesting! When all was said and done, there were eight books that weren’t salvageable. Two of the eight were literally in pieces. It was a BAD day. I was sad, exhausted, frustrated, discouraged. I was kicking myself for leaving him out unattended, kicking myself for not giving him the exercise I thought he needed. I wasn’t sure if we were the right home for him, or if I had it in me to get past this stage. I was sure I was a bad dog-mom. He went to daycare that day and the next, and I slept in the girl’s room in the attic the second night to catch up on sleep, and those things helped.

Once I’d gotten a little more sleep, and gotten past the fresh wound of seeing my books torn apart, I was feeling more optimistic. Duncan really is a sweet dog, funny and charming and lovable. I do like having three dogs, most of the time. I like the way they play together and snuggle together. And really, I have to believe Duncan will grow out of this stage eventually. So, if Duncan is like a toddler, and maybe Grace is like a preschooler, I decided there was a possibility that having them together was the problem, and resolved to try separating them at night. For the last two nights, Grace has slept upstairs with the girl, and Duncan sleeps in the kitchen. And guys? I think it’s working! (I’m gonna knock knock knock on wood!) This morning, I didn’t hear a peep out of any of the dogs! I am greatly encouraged and really hoping this makes a difference in our sleep patterns. I need my sleep. Seriously.

So because I like my dogs today, I’m going to share some of the fun photos I took this weekend. I pulled out the good Canon to play with settings, and dogs make good subjects. They’re all very photogenic, in my humble opinion.

They were having a marvelous time romping around the yard, taking turns chasing each other and of course chomping on each other. I tried to get some individual shots as well. Jack was not interested in being cute. He’s a very serious old-man pupper. He’s here for the work, not the media. 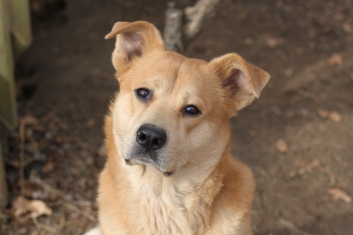 Grace doesn’t mind the paparazzi, but you have to move fast to get the really good shots. I’m rather pleased with what I got. There were others, but when you’ve got one like this, who needs more?

And then there’s Duncan, the fresh new star who wants all the attention. He can do anything from playful to serious to tough. He’s very versatile, you know.

So yeah. I think I can do this whole three-dog thing. It might take every last bit of my patience, and we may never own anything nice ever again, but at least I’ll have my puppers.

He’s a shepherd mix, about 15 months old and 78 pounds (or so they said. He doesn’t seem that heavy, but he is solid). We met several dogs over the last week or so, trying to find our newest pupper, and none of the were just right. Duncan was a great mix of cuteness, playfulness, and respectfulness. They all three seem to get along well, and Duncan backs off every time one of the others corrects him, which is a great sign. He runs around the yard with Grace, which she loves, and he roughhouses with Jack, so I think this might work out well. (Fingers crossed!) He doesn’t have great manners all the time so we’ll be working on that, but seems willing to learn.

Duncan was adopted from the Great Plains SPCA, and they were super helpful in our search. But in the KC metro area, you can also find lots of furry friends at Wayside Waifs and KC Pet Project. I’m a big advocate of Adopt, Don’t Shop!

There has been a bit of knitting here and there too. I finished the set I’m donating to a silent auction fundraiser and I think it turned out pretty cute. 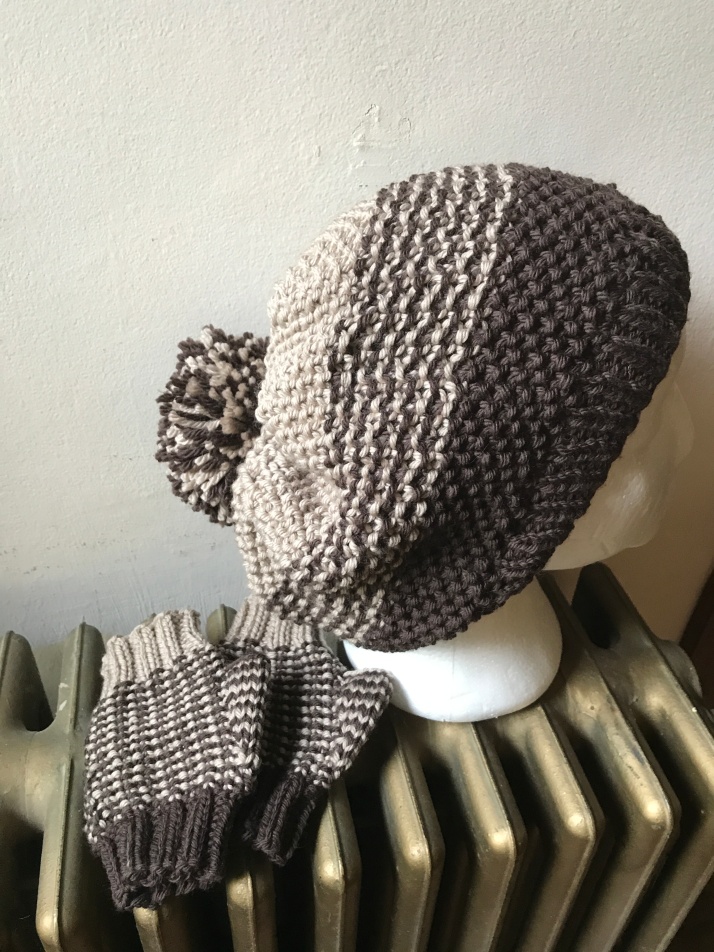 I used the visual element of the Twinkly Lights cowl and combined it with the Zig Zag Chevron hat and the 75 Yard Malabrigo Mitts. Hopefully someone likes it enough to bid on it!