I really only meant to go to one yarn store during our Colorado vacation. Looking back, I’m not sure why I thought that was reasonable, or even feasible for me. But that was my plan, and since I’d gotten in trouble at the Loopy Ewe the past two years, I was going to avoid them. Instead, I chose LambShoppe in Denver. It was in a cute but busy part of town, and the boys weren’t interested in joining us, so they dropped me and the girl off at the curb. The store was small but had lots of fun yarns, both big names and small. The saleswoman immediately asked how she could help me, and I cheerfully said, “Just let me look at the yarn!” I try to focus on local dyers when I’m buying vacation yarn, and I found quite a few choices. Unfortunately, the saleswoman was one of those who thinks she needs to engage every shopper frequently, and that bugs the crap out of me. Still, I found some good stuff.

But then! As I was pondering my choices on the table there, that same woman walked by and said, “Oh, you need to get out of your box and try something new!” She’d already annoyed me enough that I replied, “How about I do what I want?” I mean, seriously. Let a knitter pick her own damn yarn, am I right? Anyway, beautiful yarns, if not all local. The woman’s one saving grace was that she found me a second skein of the Manos Locura Fluo (the crazy neon one in the middle). I’m collecting skeins for a sweater!

I thought I was good and happy but then we went to Colorado Springs, and we had some extra time, and darned if we didn’t end up at another yarn store. Ewe and Me was a little hard to find, and the font is hard to read on the sign outside, but I’m so glad I found it! It was a BIG store, with a huge table down the middle with comfy chairs for the boys to sit in. The women chatted with me at first but then let me browse at my own pace. And the yarn! So much local yarn, so much gorgeous yarn! 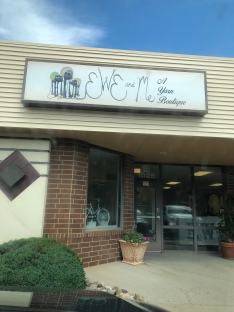 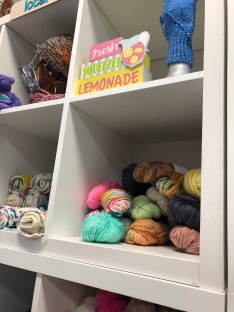 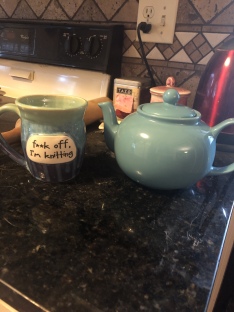 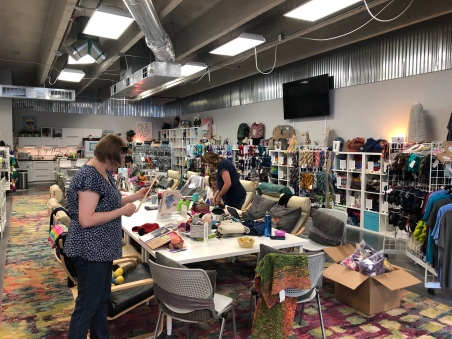 I saw small dyers I’d only followed on Instagram, like The Lemonade Shop and Artistic Yarns by Abi, plus ones I’d never heard of. I bought six skeins, I think, plus that fabulous mug. And another size 5 circular needle for shawls. And maybe an enamel pin.

That was plenty, right? It really was! I would have been happy to leave it at that. Except on Sunday the boy and I were on our own, and we went to Longmont to check out a guitar store. And there happened to be a yarn store a few doors down. Sigh. Three more skeins went in my bag. But one of them was Dragon Hoard Yarn, who I’d just started following on Instagram! She was doing a trunk show there so of course I had to grab a skein.

That’s how I ended up with this beautiful, extravagant assortment of yarns to feed my stash!

Now, let’s see if I can restrain from buying more new yarn for a while!