Maybe I needed that fast FO to kickstart my finishing urge: I finished two more projects in the last two days! Apparently, if you keep knitting on something, eventually it gets done. Crazy, right? First I finished my Gossip socks, on the needles for two months. 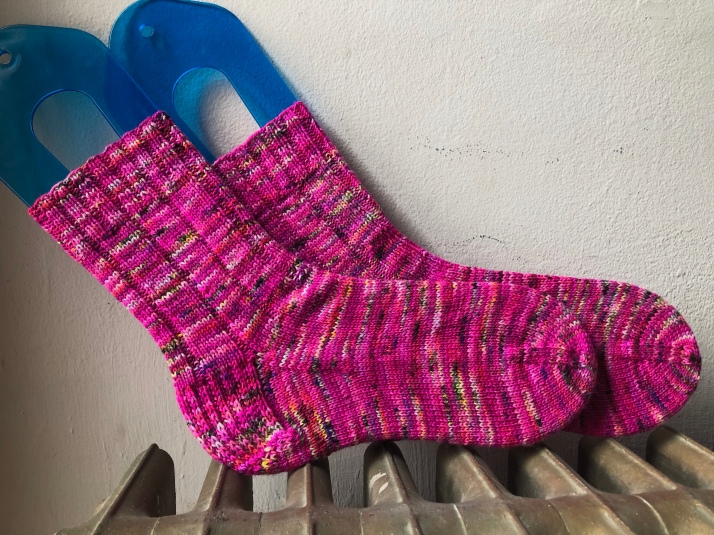 The yarn is Hedgehog Fibres Sock and it’s so pink that I struggled to get an accurate photo, but this is pretty close. I liked knitting with this yarn; it wasn’t like alpaca-soft but it felt good in my hands, and it feels like it will hold up well. I’ll let you know!

My other FO is my Standing Rock Hat, which took a month despite being just nine inches of ribbing. It was my travel project until I decided it needed to just be done.

Mine didn’t look as good as a slouchy hat as the designer’s did, so I cuffed it up and like it a lot. The yarn is Primrose Yarn Co. Jasper, a DK merino. It wasn’t nearly as soft as I thought it would be, so I don’t know how it will feel against my skin for prolonged periods. I don’t normally block hats but I think I’ll unsnap the awesome removable pompom and give it a soak in some wool wash to see if it softens up.

I can see the finish line on another project, so that’s my goal for this weekend. Hope you all are getting some productive knitting in too!