I haven’t shown much off but I have been knitting and knitting over the last several days so I thought I’d share what I’m working on. My top priority is my Late Harvest shawl with the Manos del Uruguay Feliz yarn. Loving this yarn, and liking the project more now that I’ve moved on from the endless garter stitch. This is really cool:

I’ve got three more pattern repeats and then it’s done, so that’s only about 21 rows. I can do that easy this week if I work on it every night. But I’ve been distracted by my new sweater project. I’m making a Clarke Pullover with Lion Brand Jeans yarn and I’m in the newlywed phase where I want to knit on it all the time. I just made it to the join-in-the-round point.

It would be awesome if I could do this as a NaKniSweMo project but since I need to finish Late Harvest, I’m not optimistic. We’ll see. If I can be monogamous after I finish the shawl, it’s a possibility.

During the work week, I’ve been knitting on my Goth Kitty sock, done with my favorite Vanille Latte pattern and Felici yarn. 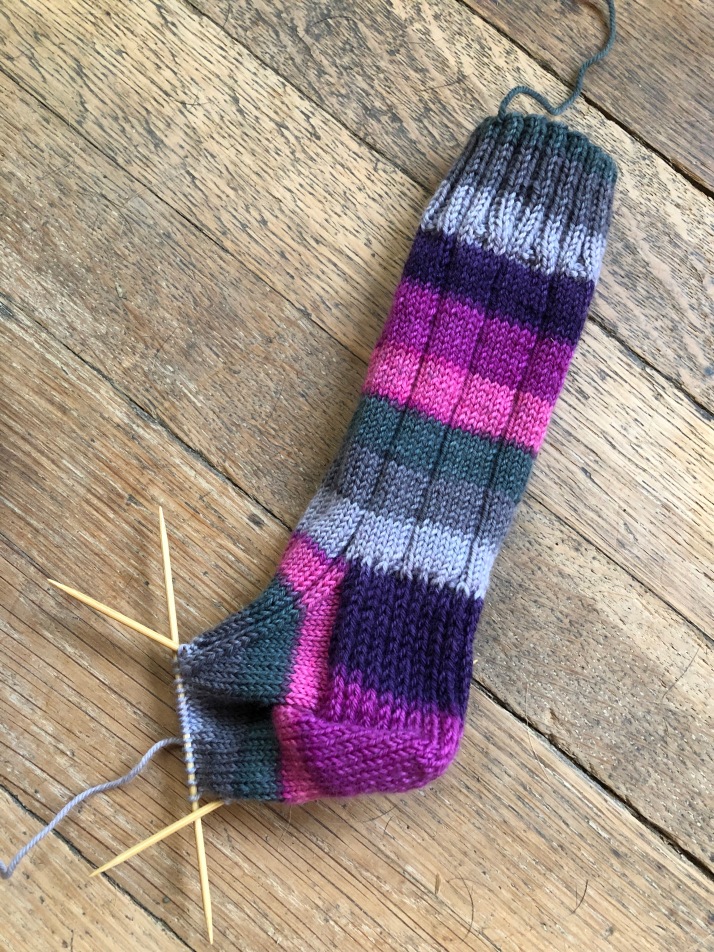 I don’t love the way the stripes fell–I wish I’d had a gray heel and more of the purples on the foot, but I can always do the second one that way and have fraternal twin socks instead of identical.

Before I run off to knit for the rest of the morning, I want to share something the mother included in an email yesterday. It expresses some of the darkness I’ve been feeling in my head:

It was written in 1863 by Longfellow, and as she wrote, “The country survived then and we’ll survive this.”