Well, crap. Edward is injured and needs some help. This has been looming for a while; his first injury occurred a few years ago, and things have been building since then. Now, don’t fret too much: Edward is my car. But I am fretting. Most importantly, I love my car and I want Edward to serve me well for at least another couple of years. But also, there’s just never a good time to spend money on car repairs. I think it’s time, though. The biggest one is likely to be the original. Someone who was not me was driving Edward and going too fast when he hit a stretch of unpaved road and the car bottomed out on a manhole, damaging some important metal body work on the bottom. Clearly that wasn’t urgent, because I’ve been driving like that since then.

But that incident also damaged the belly pan, or whatever that protective plastic layer is called, and it came loose once when it didn’t get fastened securely after an oil change. I went back, they refastened it, I went on my way. Then a few weeks ago, I pulled too far forward in a parking space and that pan caught on the concrete stopper thing. When I backed out, the pan came loose, and though I drove immediately to a car place, it was too damaged to save. (In my defense: I didn’t pull forward that far. It was like when you pull forward super slowly until you gently bump the thing. So, I mean, clearly there were already problems, right? Right.) Anyway, I knew I needed to get it replaced, but I put it off. Like you do.

Okay, right. No problem. I parked more carefully after that. Then last night, I took the mother and the boy to dinner, pulled slowly into a parking spot, heard something weird so I put it in reverse and bad things started happening. Apparently there was a bolt/screw thing sticking up out of the concrete stopper thing (don’t you like all my technical jargon?) which caught on the edge of the front bumper, and when I reversed, it started pulling the bumper loose from the car. GREAT. JUST GREAT.

Guys, I swear, I am not a bad driver. I have never had things like this happen before, and just keep happening. Anyway, this feels like a storm of all these little things swirling together to make for a sad little car. I did get the bumper mostly back on, but of course it’s not great. So I’m pretty sure my day off today will include a trip to the body shop to get an estimate of time and cost to get Edward put back together again. Cross your fingers that it doesn’t break the bank. I was hoping to leave him there and steal the girl’s car, because she and the husband are out of town for a music school audition. (They’re in Colorado. I’m totally jealous.) But she took the one car key with her. Of course. So I’ll figure out a plan B and it’ll be fine. It’s fine. It’s all fine.

After all that, let’s finish with something happy, shall we? Here’s my new sock, started last night. It’s going to be a plain vanilla sock to let the yarn take center stage. 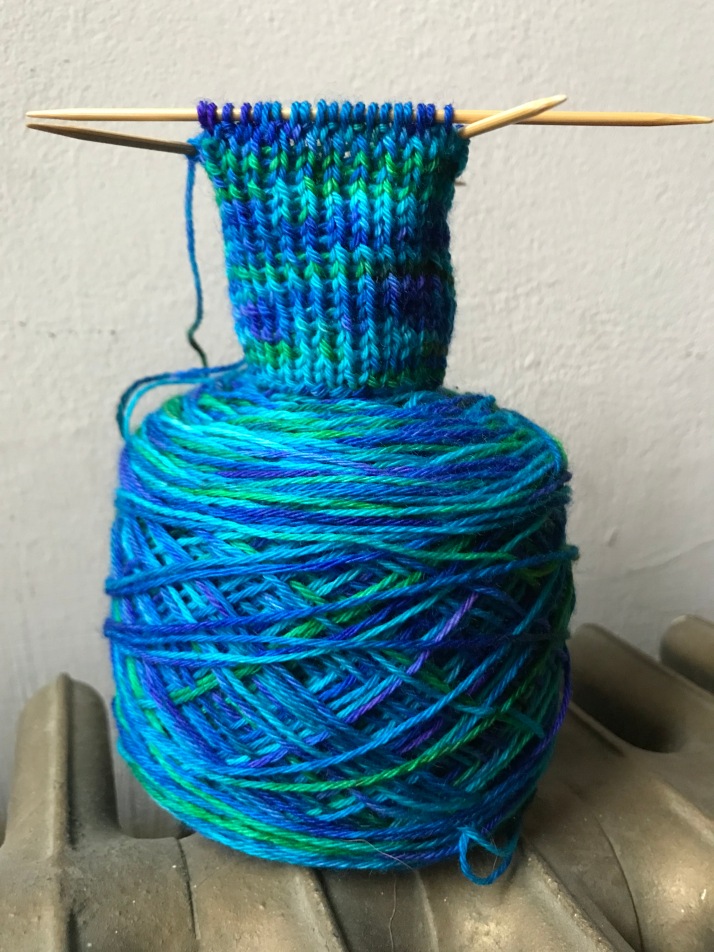 The yarn is Hedgehog Fibres Sock in color Medusa. Love it!

9 thoughts on “This is not ideal”