I unpinned my Madelia shawl this morning and started taking photos as soon as I got enough daylight. I just love lace, don’t you? 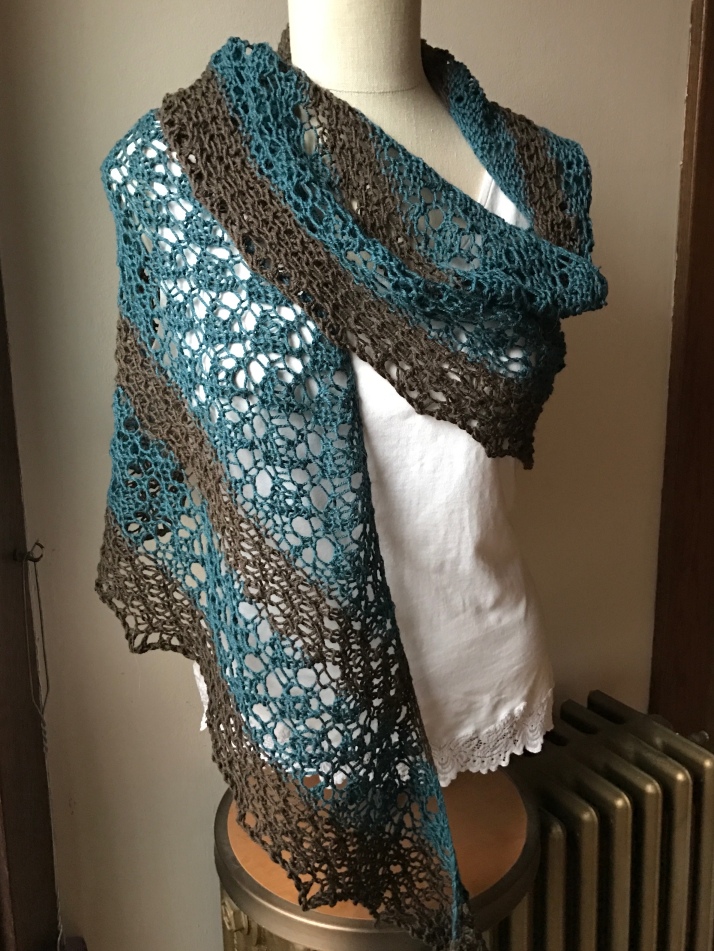 The only modification to the pattern was to use DK instead of sport weight. My edge didn’t come out quite as pointy as hers, but close enough. If you don’t set it aside for two months as I did, it’s a relatively quick knit. The pattern was well-written and easy to follow (except for one bit where it says to use the right needle tip to lift a stitch over, and I think it should maybe be the left needle that’s doing the lifting). Plus it’s super easy to modify; it’s written for three colors but obviously I only did two. It would also be lovely in a solid color. And if you made it in a fingering weight, I think it would be a good size for more of a scarf look.

This morning I came to the determination that I am inspired more by yarn than by patterns. I wanted to cast on some new projects so I had more variety, and went to my stash and picked out five yarns that were calling my name. Thanks to Ravelry, a short while later I had patterns picked out for all of them and have big plans for today! … Except I just realized that none of them are a hat, and I need a hat in the mix, so I’ll be revisiting the stash in a bit. Yeah, I’ll be doubling my WIP count today. Right now I’m okay with it. We’ll see how long it lasts before I’m hit with a bout of finish-itis!

More finished socks because apparently a knitter can never have too many socks. 🤷🏼‍♀️🧶🧦💜
I have ALL the puppers! 🐕💜🐕💜🐕