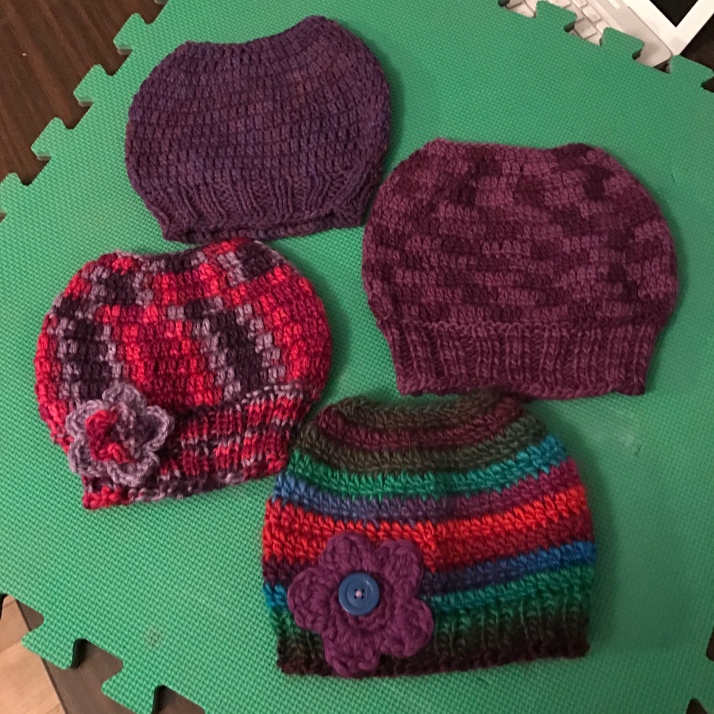 First up: Messy Bun Hats! Yes, I jumped on the bandwagon, but it was by request. The bottom two are for two of my nieces, and the top two are for a friend’s nieces. I used this pattern as a basis but modified a bit, mostly by picking up stitches for a knitted brim instead of crochet. These hats are incredibly fast to make. 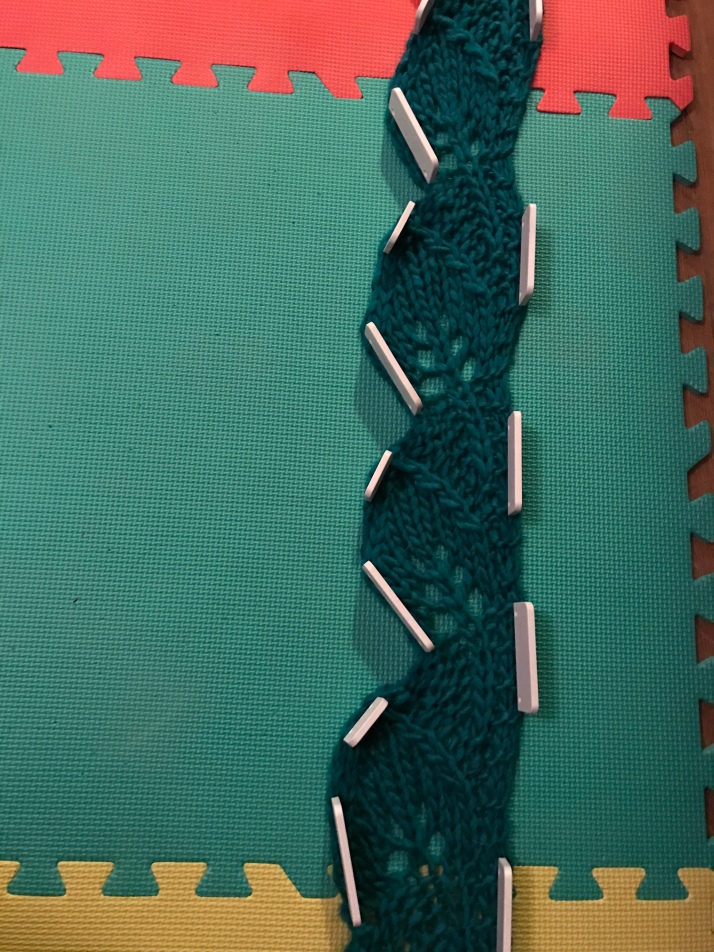 This scarf is for a coworker, and it was also super quick to make. I used Susan B. Anderson’s Leaf pattern and one skein of Bernat Roving and got one cute scarf. Hopefully the blocking keeps it from curling too much. 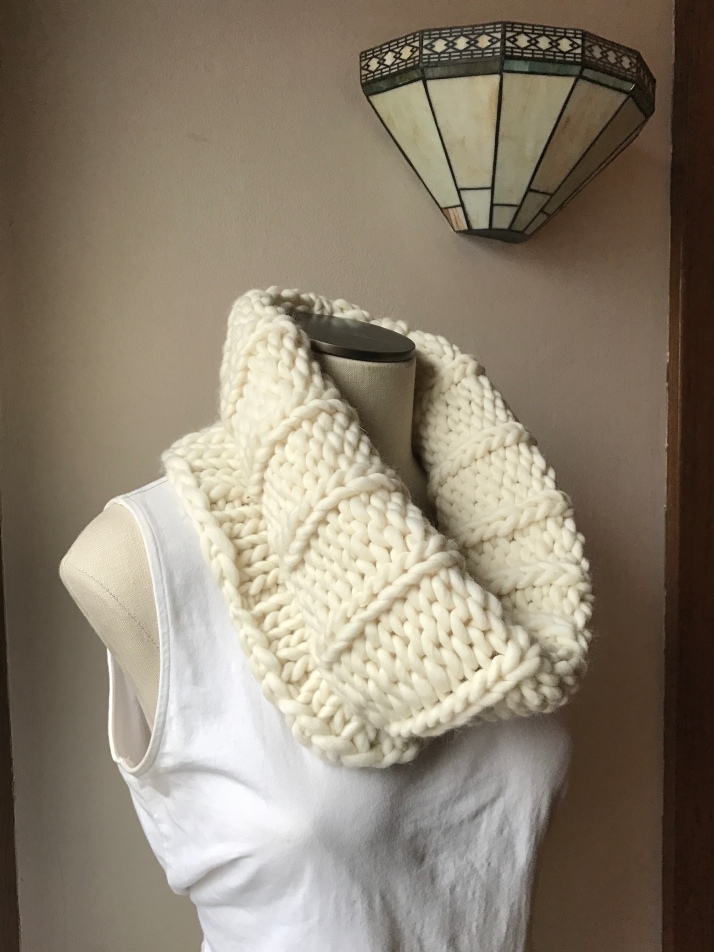 This is another cowl with Cascade Yarns’ Spuntaneous yarn and I think it’s stunning. Plus, big yarn + big needles = fast project! Pattern is New Years Cowl. 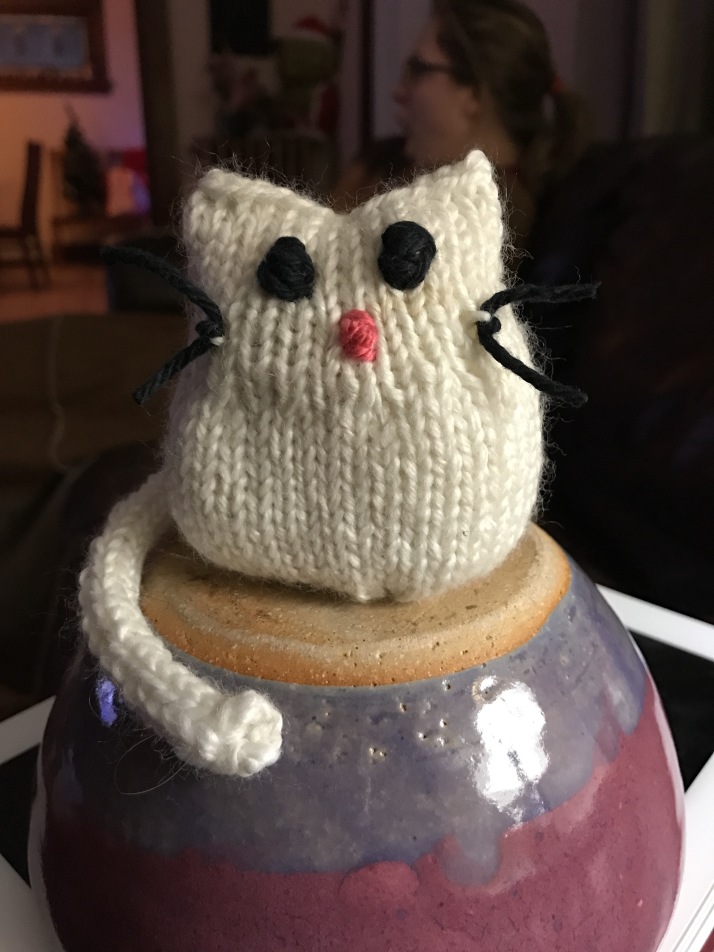 This little kitty just needed whiskers, so that was a fast finish too. I dabbed some glue on them and now they’re drying, so hopefully they’ll stick out nicely and my nephew will be pleased. He’s one of my favorite people to knit for; he just loves everything so much. 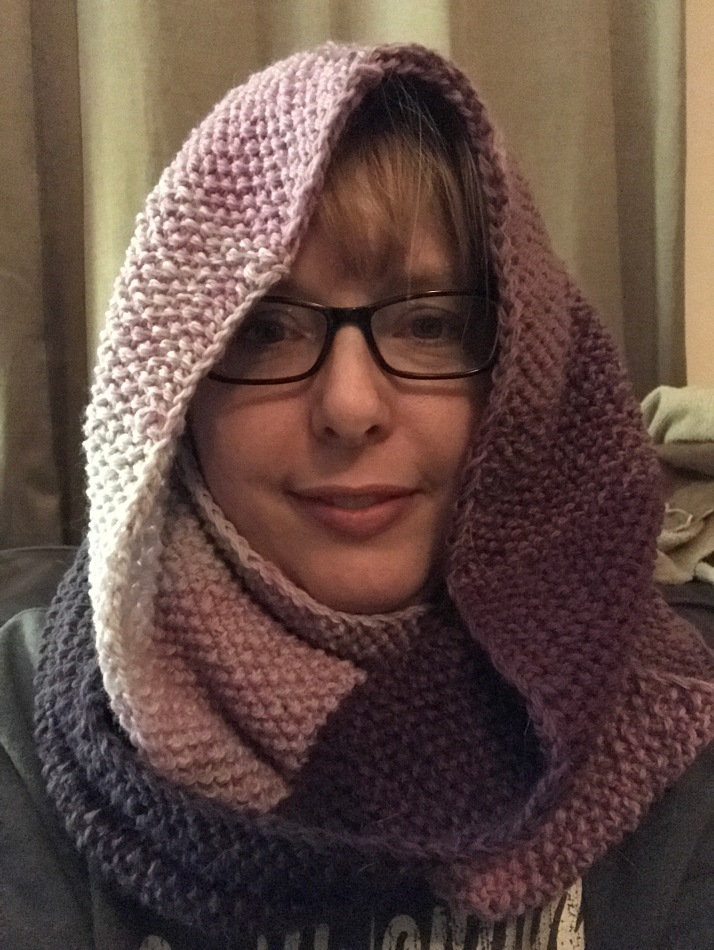 Okay, this one was not a fast finish. I started this in February 2015 and finally forced myself to finish it. It’s not perfect, not exactly what I thought it would be, but it’s done, and once I’ve taken a break from looking at it, I might even be able to wear it. Pattern is Purl Soho’s Gradient Cowl and I used 8 colors of KnitPicks Palette.

All right, are you ready for the last reveal?? It’s my favorite, I think. So, I work in a lab that studies yeast, and a while back my boss asked me to make pombe yeast hats for the team. She didn’t have any other requests or ideas beyond that, so I asked what it looked like. (I’m the non-scientist admin person; I don’t actually play with the yeast.) Tetrads, she said, like four peas in a pod. I went hunting, asked my Knitting SIL for advice, and eventually stumbled on bobbles. Bobbles ended up being perfect. 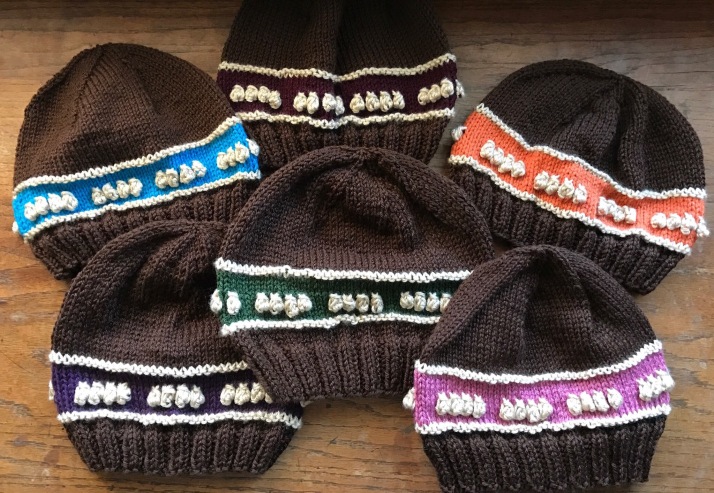 I started with this pattern, but it was mostly for the general look. I kind of made up my own stitch counts, and changed the bobble pattern to be groups of four. But guess what? Bobbles are horrible. I mean, they’re not that hard, but good grief they’re fiddly and interrupt the rhythm of knitting and they were a pain in my butt. I don’t think I’ll be doing much more bobble-knitting in the future. Still, I persevered and everybody got their own color, and I think they were pleased. At least some of them were. Some of them might not be hat people, and that’s okay. It was a fun project.

And after all that, I’m down to only four WIPs on my needles. I didn’t commit to very much gift-knitting so I don’t have any projects that I *need* to finish. I mean, I really should pick up one of my WIPs, but I’m also feeling kind of desperate to cast on something new, something else with bulky yarn. What’s your favorite quick bulky-yarn project?