Sometimes, not very often, I question my decision to have dogs.

Yesterday morning I was coming downstairs on my crutches. Through the window at the landing, I saw the neighbor’s dog running freely down the street. Knowing I couldn’t run after her, or call our neighbor (I don’t have their number), I made it down the rest of the stairs and to the front door, thinking maybe I could call her and get her to come inside. Then what, I had no idea. Fortunately, my husband was outside cleaning frost off the car, so he let the neighbor know and helped look for the dog. And within ten minutes, another friendly neighbor had managed to get her on a leash and returned home. Whew, good news, crisis averted. Right? Right.

Ever since we got our fence finished, the puppies love to be outside. Grace especially will spend hours out there if we let her. Our morning routine is for me to let them out while I have breakfast, Jack will come in after half an hour or so, and Grace stays out for another hour or so. Well, it got to be longer than that and I figured I better get her in. I opened the door and hollered at her. Usually she’ll pop up right away, even if she doesn’t come in easily. But not yesterday. I found my crutches and hopped out to the back deck and hollered again, and after a minute I saw here…on the other side of the fence. Seriously. She’d broken a picket and gotten out and thought it would be fun to go frolic with the neighbor’s dog. Yep, same neighbor. They have an invisible fence so Grace could just pop over and say hey, and she thought that was fantastic.

Still with the crutches, I hopped down the steep stairs to the yard. Neighbor came outside, put his dog inside and tried to catch Grace. She’s a wily little thing, though, and thought it was all a fun game so she ran all around his yard and toward the street and back toward our yard and then around again. With just a sock on my good foot, I hopped to the gate and opened it, keeping Jack inside at the same time, calling for Grace so she could ignore me. Poor Neighbor kept chasing the darn dog until I asked her if she wanted a carrot (they love their carrot treats), and somehow she ended up going back through her hole into the yarn. Neighbor put two big rocks in front of the hole and I herded both dogs up the stairs and into the house. I locked the door and collapsed into my rolling chair. My sock was damp and muddy , my foot was freezing, and I was shaking with adrenalin. 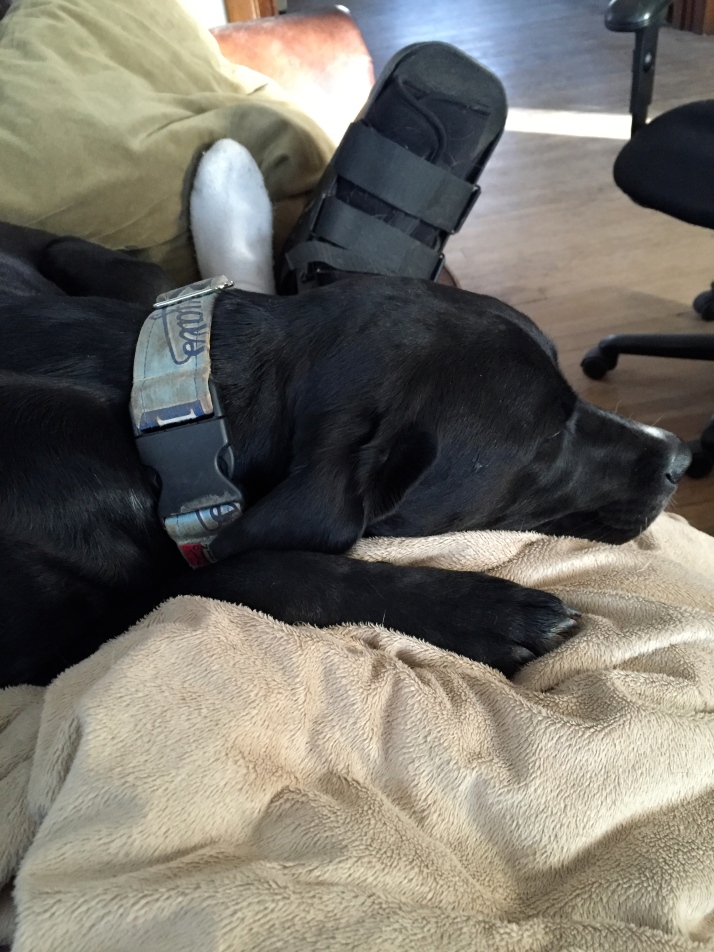 Darn those dogs anyway. As near as we can tell, Grace was digging under the fence and broke the picket forcing her way under. The picket has been replaced and her two big holes have cement blocks in them. I know she’ll dig more if she can. So yeah, now I guess we’re going to look into getting an invisible fence as a second layer of protection. Until then, her time outside will be limited and have frequent supervision.

As for me, I recovered by knitting along to a Harry Potter movie marathon, and today will be more of the same, with a fervent hope that it will be a much less eventful day!

p.s. I had a knitting photo from yesterday to share but it’s not loading and I don’t want to fight with it. Maybe tomorrow.

3 thoughts on “The Day of the Dogs”