The puppies discovered they can reach the pile of sticks we made during our yard work and they’ve been having a marvelous time pulling them out one by one and fighting over them. Because as you know, just like with children, you can’t simply give each puppy a stick and call it good. No, one stick is clearly better than the other, and both must fight for the right to gnaw on it. Jack won this time.

In between taking the dogs outside in the gorgeous almost-fall weather, I managed to finish two hats. One is the Lunar Eclipse hat, which is even getting button accents.

The other is a basic pink. It’s not quite as bright as it looks in this photo; it’s more of a dark raspberry pink. I’ll leave off buttons on this one. 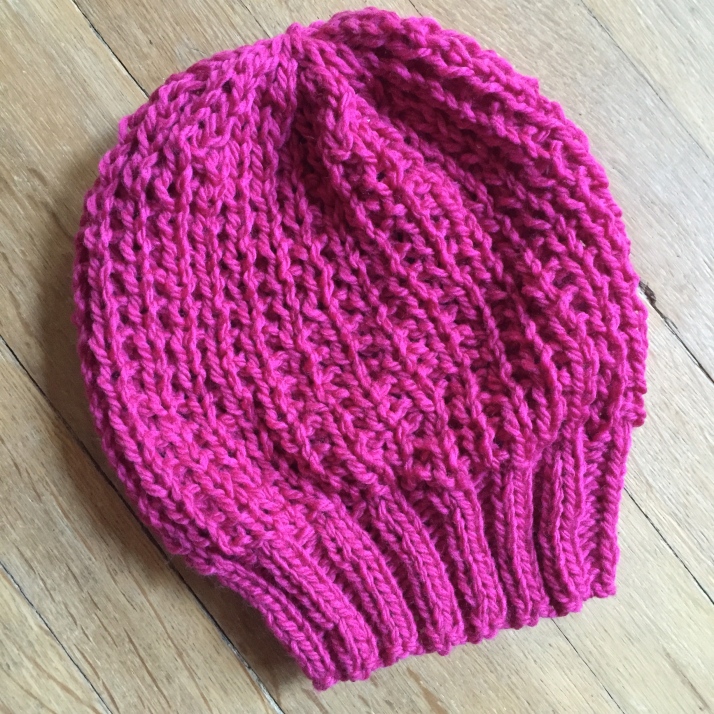 What color next: purple, teal, or green?

I also got to take the girl shopping for a Homecoming dress yesterday. The dance is this Saturday and the rest of the week is pretty full, so last night was basically our only opportunity. We found three great options. Two were full-length, gorgeous but more formal, more Prom-ish. One was shorter, with a swirly skirt, beaded waist and gathered bodice. It’s lovely, looked gorgeous on her, very feminine without being overly revealing. She wasn’t sure any of them were “the One” but with limited time, she had to pick. She picked the shorter one and by the time we got home and she modeled it for her dad, she was really excited about it, liked it better than she did in the store. So she had him take a photo and she texted it to some of her friends. Two of the three were supportive and encouraging, they loved it, so cute, she looked great. But the other one? She decided to tell my girl she looked like one of the Golden Girls, that the dress was pretty but it made her look older. Seriously?? If you’re shopping for a dress with a girlfriend and ask for opinions, I get it, this would have been acceptable. (Depending on the friendship. I definitely have people who could say this to me without fear of retribution.) But once the dress is purchased with no other options? That’s just mean, I think. Or thoughtless, I’m not sure which. Either way, my daughter was hurt, and I hope she’s able to set that comment aside and remember how she felt in the dress before. It’s just one more example of why it’s best to think before you speak!

One thought on “Two Finished Hats”