I was never a Dog Person. We had tons of pets when I was growing up, but I always preferred the cats to the dogs. Cats were soft and fluffy, cuddly and cute. Dogs were big and messy, noisy and smelly. When my husband and I got married and rented our first house, I was so happy to bring my cats from home to live with us. After that last year of college, they moved with us to an apartment, then to our family home. I liked cats. I was a cat person.

But I tried to be a dog person. After we bought our house, my parents gave us their dog. They were moving and didn’t have a fenced yard, which we did. So we got a big white husky-type mix named Quincy. He was sweet, if stupid, but he had a habit of pooping inside, and he loved to escape. We tolerated it. But then our first baby was born, and suddenly I had a dog following me around as I tried to take care of this fussy, colicky, screaming child. My patience was limited. I couldn’t deal with both, and I confess we gave the dog back to my parents after they’d fenced their yard. Life was simpler with just the cats.

Then my favorite cat died, poor Sasha. I was pregnant with my second child at the time, and the hormones got the best of me. We quickly adopted another Himalayan who we named George. Several months later, we found out our firstborn is allergic to cats. We helped George find a good new home, but the other cat, Beeper, was old. He was my cat. Katie’s allergies weren’t severe enough to warrant rehoming him immediately, so we decided to make it work, and we just wouldn’t get any more cats once Beeper was gone. He made it to 17 years old, poor thing, before his body started giving out in all sorts of ways. I hated to say goodbye but had to do it.

We were pet-free. Somehow we never even considered getting a dog, even though nobody was allergic. We weren’t dog people. Since we couldn’t be cat people, we’d be pet-free people. And in some ways, it was really nice. The house stayed cleaner and smelled better. We could have leather couches without worrying about claws. We didn’t have to clean litter boxes. We had a bit of extra money. We could travel without care. Yes, I could do this just fine!

Then my dad, who was living in Arizona, got sick. After a few months, it became clear that he wouldn’t be able to keep taking care of his dog. Samson was a huge red husky mix around nine years old. He was docile, gentle, and friendly. I liked him. I didn’t love him, but I liked him. Enough that I didn’t want to see him go to strangers. Maybe more importantly, I loved my dad enough that I wanted to take care of his beloved dog. So Samson came home with us. 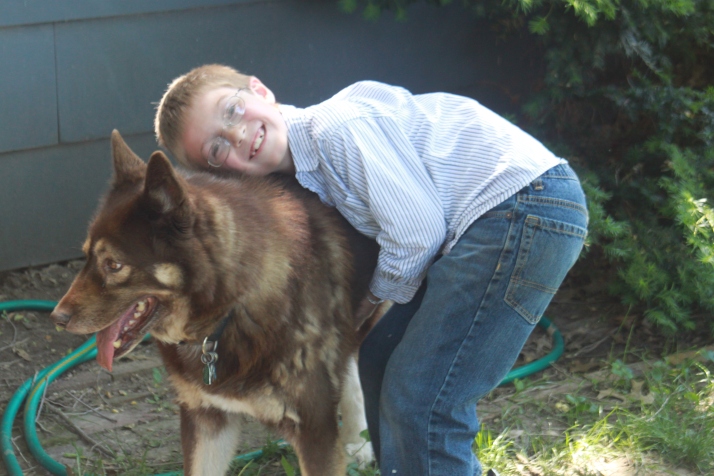 We had Samson for almost two years. Tomorrow it will be a year since we lost him, and tomorrow I’ll tell you his story. That’s what I started to do today, but this post is already too long. I guess the point today is that Samson turned me into a Dog Person. After we lost him, I really thought we would go back to being pet-free people. I donated or gave away all the dog supplies immediately. Samson was special and irreplaceable, and the only reason we had him was to to please my dad. Why would we ever get another animal?

But the house seemed so quiet and empty. I would come home and look in the kitchen door expecting to see a furry smile. I got up in the morning and the kitchen was colder without a soft dog to welcome me. The squirrels ran around our yard happily without a big brown dog chasing them. The snow fell and I couldn’t watch him frolic in it. I didn’t like it.

I lasted four months. It probably only took so long because I had to convince my husband he was ready for another dog. The kids were always ready, of course. So we scoured the animal shelters until we found our dog. We’ve had some struggles and some issues, but they’re worth it. Now I’ve got a sweet dog who snuggles on the couch with me, who plays with my son, who goes on walks with my daughter and on runs with my husband. He fills different needs for all of us, except one: that need to share unconditional love. And there’s no animal better at that than dogs.

Yes, I’m a Dog Person now. Thanks, Samson, and thanks, Daddy.

I’ve said it before and will keep saying it: if you’re wanting a new furry friend, please be sure to visit your local animals shelter(s). There are so many wonderful animals needing homes!